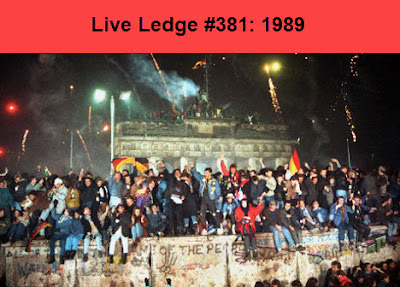 1989 was a strange year for me. For one thing, I didn't even live in my little city as I was running a record store in an even smaller town than where I have otherwise lived. And there were a few other differences in my life that year that maybe I don't want to talk about right now.

But as I say about each and every year, it was a great time for music. Yes, the mainstream sucked. But it always does. Yet the distance between the chart toppers and the alternative/punk gutter were closer than they had ever been before. Some of these acts were sneaking onto commercial radio playlists. Mainstream magazines were doing features.

It was also a year that a handful of veterans shook off their 80's doldrums and created their best work in many years. I'm obviously talking about Dylan, Neil, and Lou. All three of their releases definitely made my top ten of that year, along with records by Bob Mould, The Jayhawks, Camper Van Beethoven, and...well, I have to honestly reluctantly say...The Replacements.

Why the hesitation about the band everybody knows I love a bit too much? Well Don't Tell a Soul is almost unanimously considered their worst album. They bowed down to record company pressure and allowed the trendy production types of the time to smother their sound. It's their only record that sounds dated.

Yet I can't deny there are some great songs on it. "Talent Show", "Achin' to Be", "Darlin' One", and a few others. It's just no Tim. It's not even Hootenanny.

There was also a slowly growing movement percolating around the indie clubs. Americana acdts were popping up in Minneapolis, Chicago, Athens, and other music meccas. You can feel that influence in a good portion of tonight's show. As always, I hope everybody discovers a band or two they've never heard before! You can find this show at almost any podcast site, including iTunes and Stitcher...or