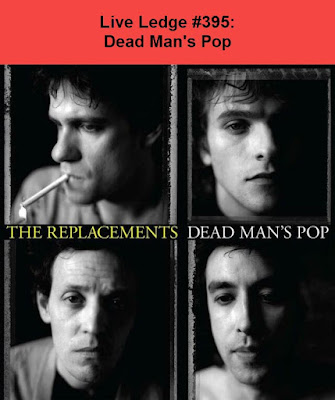 I'm sure it's to nobody's surprise that the new Replacements box set, Dead Man's Pop, is the featured release on tonight's show. Obviously this would be the case no matter what the quality of the music on said box, but in this case a close look is definitely warranted. It's everything a Replacements fan could desire.
This week's show features set focused on each of the four discs of the box. Disc one is the new mix of Don't Tell a Soul, and it's such a sonic upgrade. It actually sounds like a Replacements album after all the studio gimmicky that cluttered the initial album is given the heave ho. To contrast the original with the new versions, I've included snippets of the Don't Tell a Soul versions before each track. I've also utilized Color Me Obsessed director Gorman Bechard's full-length interview with producer (and new mixer) Matt Wallace to get even more in-depth in the what he and the band originally wanted with this record.

But that's not all. Other bands released box sets this week, and a few other records of "vault" material has seen its way to the stores. A little band from Liverpool is celebrating the 50th anniversary of the last record they recorded, and it's almost as good as the box sets for the White Album and Sgt. Pepper. And for the 40th anniversary of the legendary It's Alive recordings, The Ramones have put out a box set of four shows from that infamous 1977 run of UK shows. Add to that new Peel Sessions from Billy Bragg and Echo & The Bunnymen, along with sneak previews of upcoming R.E.M. and Kinks box sets, and you have a fantastic show!
After listening, please go purchase those tracks you enjoy! You can find this show at almost any podcast site, including iTunes and Stitcher...or