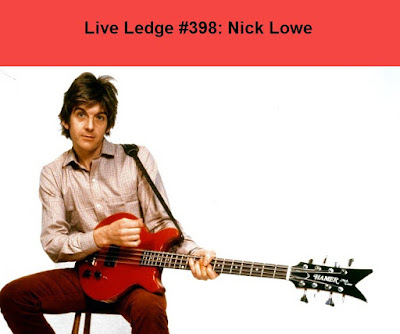 Nick Lowe has sort of quietly put together one of the best resumes in rock and roll history. He's got tons of fantastic recordings, solo and with bands such as Brinsley Scwarz, Rockpile, and his recent collaborations with Los Straitjackets.
He's also one of the greatest producers of all times, helming some of the best albums or singles by the likes of Graham Parker & The Rumour, The Damned, Dr. Feelgood, Wreckless Eric, and, of course, Elvis Costello.
Not to mention he was once married to Carlene Carter, which made him Johnny and June Carter Cash's son-in-law! (Oh to be in the studio when Johnny recorded Nick's "Without Love" accompanied by Elvis Costello, Dave Edmunds, and many others.)
Inspired by the recent release of "Cruel To Be Kind: The Life and Music of Nick Lowe" by Will Birch, tonight's show is a snapshot of just a few of those great moments. If you're intersted at all in Lowe's life, go buy this book. It's informative and at times pretty hilarious.
After listening, please go purchase those tracks you enjoy! You can find this show at almost any podcast site, including iTunes and Stitcher...or