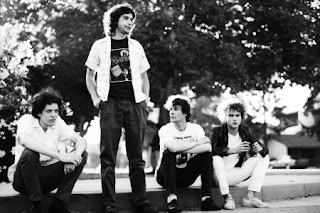 Rock and roll isn't supposed to have any rules, but in my decades of preparing end of the year lists the geek in me has self-imposed quite a few. A couple of weeks ago I posted my 40 favorite records of the year. My rules for such a list disqualify reissues, box sets, vault releases, tributes, compilations, soundtracks, covers albums, and anything else that I don't believe constitutes a "new" record.

Some people do include such titles in their lists, and in some cases I understand. Why shouldn't the Juliana Hatfield release of Police covers count as a new release? That's something for me to spend 2020 debating. But I'll never include repackages of old material in my main list. It's a list of new music! It's not fair to those who put out music in 2019 to compete with tunes we've already lived with for 30, 40, 50 years. Mikal Cronin may have put out what I consider the best album of 2019 but I've lived with it for just four months. I can't remember a time when Abbey Road didn't exist.

So here are my 20 favorite releases of these sorts for 2019.

1. The Replacements, Dead Man’s Pop. Record companies all over the world should look at this box set. Take a band’s most maligned album and “fix” it. In this case it’s the discovery in Slum Dunlap’s house of preliminary mixes made by the original producer of Don’t Tell a Soul, generally considered the weakest Replacements record. This “new” mix sounds almost like a completely different record. The guitars have room to breathe. The drums sound like actual drums. There’s no mush of studio effects and other gunk spoiling the performances. Then add a disc of demos, outtakes, and a drunken (and unlikely) session with Tom Waits. Top it all with an incendiary live recording from the same era and you have a perfect box set.

2. The Beatles, Abbey Road. This was a year full of “anniversary” packages, and none received more press than the 50th anniversary of the last album the Beatles ever recorded. Like last year’s White Album and Sgt. Pepper before it, there’s a touch up mix by George Martin’s son, Giles, and a couple dozen outtakes and demos. Although these extras pale in comparison to the riches of the White Album, they do assist a person in understanding just how the album was created.

3. Bob Dylan, Travelin’ Thru: The Bootleg Series Vol. 15 1967-1969. This year saw two separate editions of Dylan’s acclaimed “bootleg series”. The first was a box set of “Rolling Thunder” performances released in conjunction with a Netflix documentary. This set is all about Dylan’s late ‘60’s sessions in Nashville, highlighted by a couple of days recording with Johnny Cash which are, quite frankly, more fun than artistically important.

4. Juliana Hatfield, Sings The Police. Once again, Hatfield does the impossible. Last year she was able to breathe life into Olivia Newton-John songs that I would never go out of my way to hear. This year she’s done the same with The Police! Her lo-fi, quite often synth-driven, versions highlight that maybe Sting and Company were more interesting than I ever gave them credit for.

5. Woodstock, 50th Anniversary Releases. There’s a ton of Woodstock-related releases to celebrate the 50th anniversary, but it’s actually been done in a clever way. There are sets devoted to many individual acts, most for the first time. There are compilations of all different lengths, including a giant package involving almost every note played during the festival (along with a disc of nothing but crowd announcements).

6. Prince, 1999. It’s everything a Prince fan could want. Besides the remastered album, there’s a disc of extended mixes and b-sides, another couple of discs of outtakes and unreleased songs, and also a concert. Oh yeah, and a DVD of more concert material.

7. Superchunk, Acoustic Foolish. Members of the Merge Records subscription service received a great surprise this summer in an all-acoustic re-recording of one of Superchunk’s best albums. Later, it received a full release, along with an accompanying acoustic tour.

8. Graham Parker, Squeezing Out Sparks Solo. To celebrate the 40th anniversary of what most people consider his best album, Parker also put out an all-new acoustic re-recording.

9. Ty Segall, Pig Man Lives Volume 1. This four-record box set of demos from Segall’s last few albums shows just how skilled he is as a producer and musician. Most artists who could create demos of this quality would have just released them as they are. Somehow Segall managed to improve on them on their full-fledged releases.

10. The Kinks, Arthur (Or The Decline And Fall Of The British Empire). Another 50th anniversary box set that is great but maybe not as great as the similar boxes celebrating earlier albums. The problem isn’t the original album, as Arthur is pretty much as great as the previous year’s Village Green Preservation Society. It’s that this time there isn’t a tremendous amount of worthy outtakes, and the inclusion of some newly-recorded material adds nothing to the story.

11. Billy Childish, Punk Rock Ist Nicht Tot! The Billy Childish Story 1977 - 2018. It’s pretty much impossible to create a true overview of Childish’s career. He’s had too many bands and released too many records to be pared down to a three record set. Yet this compilation actually works to show every portion of his 40 years of recording. Hardcore fans can complain that this or that is missing, but think of it as more of a sampler than a true compilation.

12. The Rolling Stones, Rock and Roll Circus. This legendary attempt to create a TV show was initially shelved for almost 30 years. Now it gets the remastered box set treatment with a handful of extras, including a quick run-through by John Lennon’s Dirty Mac supergroup of his recently-released “Revolution”.

14. The Scientists, Not For Sale: Live 1978/79. These early live tracks of the legendary Australian rockers compile radio broadcasts and other archive live recordings that include not only tracks that eventually were released on their first couple of studio albums but blistering versions of songs by The Undertones, Flamin’ Groovies, and other influences.

15. The Rats, In A Desperate Red. Long before they formed the legendary Dead Moon, Fred and Toody Cole led this Portland punk band whose classic record has been out of print for decades. Part garage, part new wave, part art rock. This is a record that certainly was ahead of its time.

16. The Ramones, It’s Alive. This year’s 40th anniversary box set centers around what was originally an import-only live album released in 1979. Besides the original concert adds three more concerts from that same 1977 UK tour.

18. David Bowie, Conversation Piece. For decades, the period between Bowie’s disastrous 1967 debut album and his first hit, “Space Oddity”, is the most mysterious and undocumented of his career. This new box set attempts to clear things up. Filled with demos and home recordings of bands, duos, and solo projects that didn’t quite work out, the box concludes with a new mix by Tony Visconti of the Space Oddity album.

19. Generation X, Generation X. Billy Idol’s original punk rock band has long been underappreciated, but this expanded version of the first Generation X album should cause people to reconsider. Yes, the extras are a typical collection of outtakes, rough mixes, and radio sessions, but they prove what a powerful band this was.


20. R.E.M., Monster. Sort of like Don’t Tell a Soul, Monster is sort of now considered one of the weak links in the R.E.M. catalog. (The millions of CD’s in the used bins sort of confirm this.) Like the Replacements’ box, this new version contains a new mix of the record, a disc of outtakes, and a live show from the period. The difference is that the new mix really doesn’t tell us anything different about the record, the outtakes are primarily super-rough instrumentals, and the live show is just a typical R.E.M. performance from that era. But it’s still R.E.M.