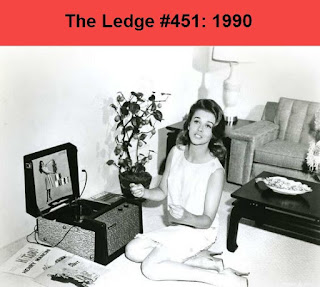 It may be a cliche, especially compared to the dumpster fire of this year, but it was definitely a simpler time for me in 1990. It was a year that I sort of became an adult. Sort of are the key words here. It was also a year of musical transition for me, as it was the year of the last Replacements album and the year of Uncle Tupelo's debut album. For the next few years, "Americana" became my leading musical force. With a few exceptions, of course. (Both of these recors, The Replacements' "All Shook Down" and Uncle Tupelo's "No Depression", get an extended look during tonight's show.)

This week's show takes a look at much of what was in my gigantic portable CD carrier during that year. Yes, I had one of those 64 disc cases that went with me wherever I went. One has to be prepared, you know. Hopefully, you'll enjoy this nostalgic look at my personal music taste from that era.

2. The Replacements, Merry Go Round

4. The Replacements, Someone Take The Wheel

6. Blue Rodeo, Til I Am Myself Again

7. The Sidewinders, We Don't Do That Anymore

17. The Lemonheads, Ride With Me

19. Uncle Tupelo, Before I Break

23. Fastbacks, In the summer

24. The Breeders, Happiness Is A Warm Gun

27. The Cramps, Thee Most Exaulted Potentate of Love