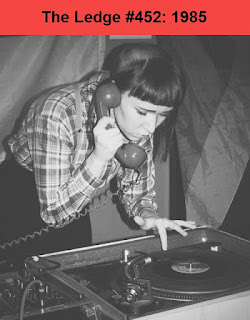 After last week's wildly fun look back at 1990, it only made sense to do another similar-themed show. This time we go back to 1985, one of the most important years of my life. It's the year I graduated from college. It's the year that music pretty much became a full time way of life for me.

It was also a year of some of my favorite records of all time, as shown by the three spotlight artists of the evening. The first is pretty obvious. The major label debut of The Replacements, "Tim", came out in September of that year, and everybody knows my feelings over that record. Another artist saw their debut album rescued from the KAUR garbage bin. Camper Van Beethoven's "Telephone Free Landslide Victory", rescued from the dumpster by the late Don Holmstrom, became the late night party record for me and my drinking buddies. And Husker Du had not one but two classic records that year ("Flip Your Wig" and "New Day Rising").

But obviously that's not all. New sounds were coming out of the UK thanks to the likes of The Jesus and Marychain. Jangle pop was alive and well in the U.S. with R.E.M. and a plethora of other artists. Even Sioux Falls had developed a bit of a scene with great records by No Direction and Ill Bill & The Spinal Chills. It's a great two hours of memories!

2. The Replacements, Hold My Life

3. The Replacements, Bastards Of Young

4. The Replacements, Left Of The Dial

6. The Smiths, The Headmaster Ritual

13. The Long Ryders, Looking For Lewis And Clark

14. Danny & Dusty, Song For The Dreamers

18. Ill Bill and the Spinal Chills, Billy Needs a Beer

19. No Direction, Getting it On with Trudy

24. Descendents, I Don't Want To Grow Up

26. Hüsker Dü, The Girl Who Lives On Heaven Hill