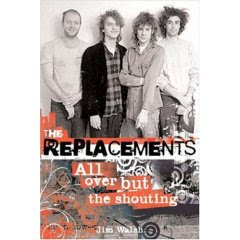 Earlier this year, Minneapolis music writer Jim Walsh contacted me with a surprise request. In the process of writing a book on the Replacements, he had somehow discovered an interview I had published in Tempest with guitarist Slim Dunlap and wanted to utilize a handful of quotes.
Obviously, I was more than honored to say yes, and on November 15 The Replacements: All Over But the Shouting will be available to “Westernerds” all around the world. A few days ago, my promo copy arrived and I did my best impression of Steve Martin’s famous scene in The Jerk to find my name in the Endnotes and Acknowledgments sections. It was a proud moment.
In late September I met the former City Pages/St. Paul Pioneer Press journalist after a Paul Westerberg interview/performance at First Avenue, and he was kind enough to agree to answer a few questions for me.

Prime: How did you discover the Replacements? What was it about them that attracted you?

Jim Walsh: Mars and I went to high school together. His brother, Jim, and I were friends. We all grew up in the same neighborhood - South Minneapolis back then was what my dad calls "the Catholic ghetto." Paul and Chris went to Incarnation with my wife, Jean; I went to Annunciation.
I liked the songs and speed and spirit. For me, there was nothing not to like. They rocked.

Prime: Describe the first time you saw them.

Walsh: Mind blowing. More so thinking about it now, though, obviously.

Prime: What was the best show you witnessed?

Walsh: The night my brother and I rolled a garbage can up on stage and pushed it so it perfectly rested next to Paul. Who looked at it and his face said, "That's about the size of it."
Then they did "Rattlesnake," I think. Bob got in it and during the solo he and the garbage can fell and it all spilled out and he jumped up, buck naked. Fucking magic.

Prime: What is your relationship with the members of the band (past and/or present)?

Walsh: My relationship is with the songs, more than anything. That's why I wrote it: I wanted to map out how and when they happened, if not why. I think they're all a little weirded out by the idea of the book. I would be, if they knew someone like me - a good listener and writer - was uncorking a love letter to the little fuckers.

Prime: Minneapolis seems to be a pretty close-knit city where everybody in the music scene knows each other. Has the fact that you’re inevitably going to run into anybody you write about ever affect your writing?

Walsh: It used to. Not anymore. I've learned a lot in my 48 years. Which isn't to say I don't have my blue moments about all sorts of stuff, but I've been through too muck life and death in the last few years to be worried what people think about me. I'm having a pretty good time, despite the world going to hell in a handbasket and everything.

Prime: Almost all fans of the Replacements play the “what if” game. Do you think they really had a chance to “make it”? If so, what was their downfall?

Walsh: Who says they didn't make it? We're still talking about their songs 15 years after they stopped playing live. Most bands would give their left nuts for that sort of legacy. Their downfall was their almost complete inability to play the game; their bullshit detectors never failed them, and they couldn't bring themselves to really suck corporate cock: it would have been a betrayal of the songs and the band's spirit and the fans.
I told my friend Craig who produces a Hollywood TV show about a rich family and the down-to-earth lawyer that represents them that they should use "World Class Fad" for the theme song. What a great song. (I’m) listening to it right now.

Prime: What is their lasting legacy?

Prime: What made you decide to write this book? Why did you format it as an oral history?

Walsh: My editor, Denis Pernu, said: "You were sort of doomed to write this book."
An editor at Simon and Schuster a few years ago contacted me about doing a book on the 'Mats. He suggested an oral history then; I never wanted to do it in a narrative form. They were a really impressionistic band, I wanted the tone to be sort of breaking glass-haphazard. I think it works.

Prime: You obviously had twenty years of stories you’ve written not only on the band but other artists. How much of the material in the book come from your archives? Did you do additional interviews with any band members?

Walsh: A lot of the material is from interviews I did over the years, in the Minnesota Daily, SPIN, Rolling Stone, St. Paul Pioneer Press, City Pages.
I did interviews with everybody but Tommy and Paul. Mars wouldn't talk, but he wrote a paragraph about seeing footage from the Entry in 81, and concluding they were a damn good little punk band. Slim and Steve Foley were really fun to talk to. As you know.

Prime: My interview with Slim that you’re using is pretty obscure – it came from a small-town tabloid that had no web presence. How did you find it, and did you discover other “lost” interviews?

Walsh: I kept lots of stuff over the years. Peter Jesperson would xerox stuff for me when they got back from tours. One interview with Paul I tried hard to find was one in Glamour or something, where he talks about how he got started playing rock and roll: "I played in a Neil Diamond cover band. We played a high school dance, and we got paid in amphetamines."
Those guys from the skyway mailing list sent me stuff, too, which was invaluable. Lexus-Nexus or whatever had stuff, too, and Google. But most of it was hard copy xerox or originals.

Prime: While putting together the narrative, did you discover anything that really surprised you?

Walsh: It's a great story, beyond the fact they were a great band. They epitomized so much, they were so human. Brothers.

Prime: You’re used to being the interviewer. With this book you’re now going switch roles. Are you nervous at all about this prospect?

Walsh: Nope. I do interviews with myself all the time when I write my songs or columns.

Prime: The million-dollar question – do you see any chance of a reunion?

Walsh: I'm the wrong guy to ask. I know a lot of people would love it, though.
Email Post