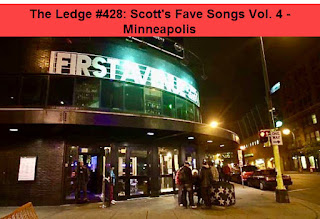 It's safe to say that a Minneapolis-themed show would come out of the series of my favorite songs of all time. It was actually the easiest of the shows to put together. No, it's not two hours of Replacements and Husker Du songs. Certainly both of those bands are well-represented but so many other bands from that great city had a huge impact on my life. Many of these are extremely popular (Soul Asylum, Jayhawks, Suburbs) but there are also a lesser-known ton of records that were just as important in my life. For example, I saw The Phones as many times over the years as I saw any of these other bands. And I may not know much about the history of artists such as The Ticks or Crash Street Kids but I played those records to death over the years.

Now here's a bit of a disclaimer. I did switch away from Minneapolis for a long set of Sioux Falls bands, and other artists from places such as Austin, Minnesota and Cedar Falls, Iowa are represented. And technically The Hold Steady are a Brooklyn band. But Minneapolis certainly influenced all of the Sioux Falls bands I included, and those other bands did consider Minneapolis home. Or a second home?