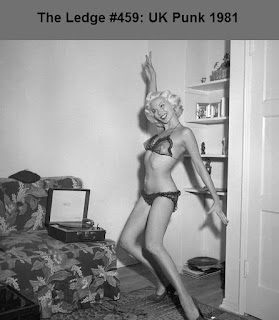 Since it's a new year I have a whole list of new "anniversaries" to celebrate this year. You can expect many upcoming episodes devoted to years such as 1986, 1991...and, obviously, 1981. Tonight's broadcast is the first of a series of programs celebrating the great tunes of that year, and this week we feature the UK punk sounds of the year.

1981 is a year where the punk went a little more underground in England and definitely got a lot louder. There's also some elements of postpunk making inroads, and quite a few bands trying to figure out just what direction to go. It's a fun show featuring a ton of big names next to bands who released one single and disappeared.

1. Blitzkrieg, The Future Must Be Ours

12. Nuclear Socketts, Shadow On The Map

13. Subhumans, So Much Money

19. Angelic Upstarts, We Defy You

28. Wanderers, Beyond the Law

29. Exploited, Son Of A Copper

32. Beekeepers, Trouble With You

34. Not Sensibles, I Am the Bishop