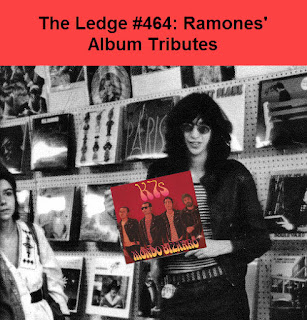 After last week's show featuring songs about The Ramones, it was pretty much a no-brainer to pair it with a show based around covers of the same band. But I've done that theme before, so how can I put a new spin on it.

Well, the answer came with today's release of K7s' remake of the entire Mondo Bizarro album, along with last year's Subterranean Jungle rerecording by Brad Marino. How about a whole show of album-length covers? If you think about it, that is the ultimate show of respect for a band and/or a record. Anybody can do an individual cover, but to remake an entire album is a huge demand for an artist. Even the best albums have a song or two that's not up to the standard of the rest of the record, so giving those songs the same attention as the feature tracks is a major accomplishment.

So with that all in mind, with the exception of covers by Tommy and the Rockets that bookend the show, this entire episode is "Side A" of these types of releases. Along with the already mentioned new records, the second half of the show dates back from a series of albums released in the 90's on Selfless Records.

After listening, please go purchase those tracks you enjoy! These great artists deserve to be compensated for their hard work, and every purchase surely helps not only pay their bills but fund their next set of wonderful songs. And if you buy these records directly from the artist or label, please let them know you heard these tunes on The Ledge! Let them know who is giving them promotion! You can find this show at almost any podcast site, including iTunes and Stitcher...or

1. Tommy And The Rockets, Rock 'n' Roll High School (from I Wanna Be Covered)

3. The Job That Ate My Brain

7. It's Gonna Be Alright

The New Rochelles from Animal Boy:

14. Somebody Put Something in My Drink

23. I Wanna Be Your Boyfriend

25. Now I Wanna Sniff Some Glue

26. I Don't Wanna Go Down To the Basement

Queers from Rocket To Russia:

32. Sheena Is A Punk Rocker

The Mr. T Experience from Road To Ruin:

34. I Just Want to Have Something to Do

Boris the Sprinkler from End of the Century:

44. The Return of Jackie and Judy

From I Wanna Be Covered:

46. Tommy And The Rockets, I Can't Give You Anything