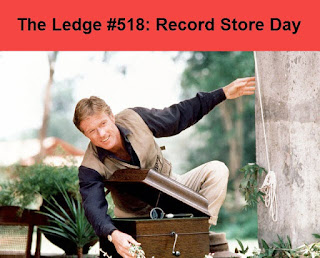 I have a few friends who are no fans of Record Store Day, but I love it. Yes, everyday is Record Store Day for me, but it is one of the few days of the year that I'm a social butterfly. I absolutely love the bonding of music geeks in the lines outside stores, and over the years I've actually made some friendships out of these same people who brave the elements on this day. We actually kind of look out for each other. If one of us is looking for something quite rare, it's not unusual for another one of us to grab it for that person. I had that happen just this last week when I arrived a few minutes later than usual, but really needed to get a copy of a certain release.

For me, this year's version of the holiday may have been the best ever. I've never had a list so long of titles that I "needed". Plus, my name is on one of them (the Jay Bennett two-record set that included Gorman Bechard's "Where Is Jay Bennett" on DVD). Besides the obligatory Replacements live album, guitarist Bob Stinson saw the release of a record he recorded with the Bleeding Hearts shortly before his death. The late Kim Shattuck of The Muffs saw a collection of demos. Lou Reed's first solo studio session hit the shelves. There was another great compilation of rare punk tracks in the Soul Jazz series "Punk 45".

Of course, there was also the usual pile of live releases this year, including sets by Stiff Little Fingers, Reigning Sound, Pixies, Nick Cave and the Bad Seeds, Roky Erickson, and so many more. Ramones albums that have not been available on vinyl for 20 years were collected in a relatively cheap box set. The list goes on and on, and tonight's episode samples a wide variety of these records.

5. Nick Lowe, They Called It Rock

15. Superchunk, I'll Be Your Sister