The Ledge #528: New Replacements & Other Treats 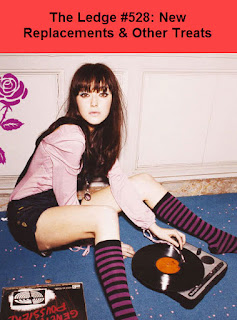 A few weeks ago, fans of The Replacements noticed that a new live record was starting to appear on vinyl distribution lists. Most at first assumed this was a bootleg, but it turns out tht the Live At Riot Fest Toronto was in fact a legitimate live album. Or sort of, as many rumors starting floating around. Tommy Stinson had reportedly made a deal with a distributor to release it, but some have said that Paul Westerberg had actually vetoed the deal. In a series of DM's with the distributor, it was verified that Stinson had set up the deal to put it out but there was no word on the Westerberg rumor. It's also the first in a series of three live releases, as the other two Riot Fest shows in Chicago and Denver are currently being pressed.

The record itself is quite great. The source is a soundboard recording, although it's not a remixed multi-track. Tonight's show features a few songs from this record, along with a number of other albums that have been played in the Hudson household these last few weeks. I've also included a handful of songs that Frank Turner performed at Total Drag on July 12 as part of his "50 States in 50 Days" tour.

1. The Replacements, Takin' A Ride

2. The Replacements, Color Me Impressed

3. The Replacements, Love You Till Friday / Maybellene

6. The Replacements, Bastards Of Young

14. The Mighty Lemon Drops, The Other Side Of You

16. The Last, Every Summer Day

18. Blake Babies, I'm Not Your Mother

30. Newtown Neurotics, Get Up And Fight