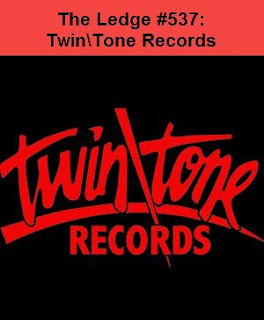 After the success of last month's series on SST Records, it was only natural that I took a look at doing a similar series featuring another of my favorite record labels of the 80s. I'd actually been thinking about a Twin\Tone Records episode for a long, long time, so why not do it now?

Many people think of only bands such as The Replacements, The Suburbs, and Soul Asylum when thinking about this label. Oh no, there is so much more. There is such a wealth that even this two hour episode misses out on some great, great releases. But I did what I could.

Just like with the first SST episode, the initial 45 minutes or so are a chronological look at the label's early releases. Singles by not only The Suburbs but Fingerprints, Curtiss A, and The Pistons. Later in the show I've got some favorite tracks by The Phones, The Magnolias, and The Feelies, along with an early release by The Jayhawks.

I did refrain from including material from the many sub-labels that were in the Twin\Tone empire. Maybe that could be a future show?

3. The Fingerprints, (Now I Wanna Be a) Space Girl

8. Curtiss A, I Don't Wanna Be President

9. The Fingerprints, Smiles For Sale

13. The Suburbs, Cigarette In Backwards

15. The Replacements, I'm in Trouble

17. The Replacements, Take Me Down To The Hospital

19. The Replacements, I'll Be There

22. The Slickee Boys, When I Go to the Beach

25. The Phones, Waiting On Patience

26. The Feelies, Slipping (Into Something)

28. Soul Asylum, Draggin Me Down

29. Soul Asylum, Made To Be Broken

32. The Magnolias, One More Reason

34. The Magnolias, Shirley's Looking Down