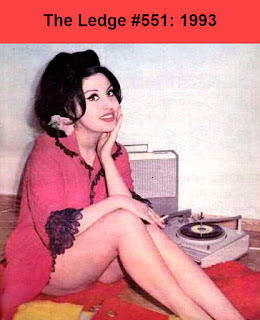 I have to admit that tonight's show made me feel like an old man. Sure, I've done shows devoted to individual years on a regular basis, but I've fully understood that the songs featured on a broadcast like last week's 1978 tribute were nostalgic looks at the past.

But tonight's show featuring (almost) nothing but tunes from 1993 didn't feel like a nostalgia trip. These songs don't feel like they are 30 years old. I swear they were released just a few years ago. Maybe it's because I still have such a connection to records like Archers of Loaf's Icky Mettle. Or the fact that Bikini Kill's "Rebel Girl" still packs the same punch it did back when it was released. Plus, I've obviously spent plenty of time with all of the solo albums released by former members of The Replacements.

Even this week's second edition of my "52 Weeks of Teenage Kicks" dates back to 1993, and in a weird sort of twist was the reason I came up with this idea. As I said last week, I had earlier realized that I owned quite a few versions of the song. But I had read on Facebook that a great Minneapolis band from the early 90's, Loose Rails, were back together and playing a show around Christmas. I loved their 1992 album, Red Turns To Green, on Crackpot Records, and I believe I even interviewed them back then before they played here in Sioux Falls.

So with this news that they were doing some gigs once again, I went to discogs to see if they had some music other than that album. Sure enough, they had also released a trio of singles around that same time, and their final single featured a version of "Teenage Kicks"! That led to a Facebook plea for anybody who had a copy of that cover, and Matt Potts from Loose Rails actually sent me a physical copy of the seven inch!

With the tune added to my folder of covers, it seemed like an obvious idea so I'm so happy to be airing their version on this episode. Once again, I would love for any band or label who has either recorded their own cover of the tune or maybe once played it live to submit their versions for future instalments of the series. I've already received a couple of submissions, and a few promises. If you have any questions, please don't hesitate to ask!

I would also love it if every listener bought at least one record I played on either of these shows. These great artists deserve to be compensated for their hard work, and every purchase surely helps not only pay their bills but fund their next set of wonderful songs. And if you buy these records directly from the artist or label, please let them know you heard these tunes on The Ledge! Let them know who is giving them promotion! You can find this show at almost any podcast site, including iTunes and Stitcher...or

5. Superchunk, From The Curve

6. Archers Of Loaf, Web In Front

7. Paul Westerberg, Knockin On Mine

20. The Habitual Groove of IT, Just Another Little Problem

28. The Lemonheads, Into Your Arms