I'm ashamed to say that I missed out on the original airing of Mr. Show. Actually, I didn't have HBO at the time. Thanks to the recent trend of releasing entire seasons of quality TV on DVD, I now have the whole series. Season 4 may be the high point of the run, particularly the first episode, where these shots were captured. 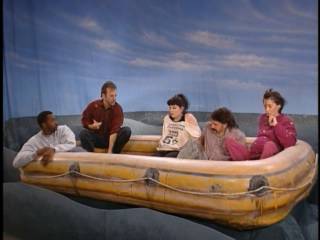 (Description from Mr. Show What Happened?)

Lifeboat
Sole survivors on a life raft: talk show host Todd Linder Floman, panelists, and one member of his studio audience are awaiting rescue; eight days after a hurricane sank their cruise ship where they were taping their show on relationships. A white trash love triangle continue squabbling; mother and daughter in love with the same man. The audience member guy tells the sad group what's what, starting with the pregnant mother - "You need to respect the baby, 'cause life is precious, and God, and the Bible." He puts a shout out to figuring out how to survive without food and water. Two-timing Derwin's "super-secret lover" climbs into the raft. He was on an island, but he refuses to share the info ("I ain't sayin' Mr. Three-timing Whore of the Universe!") Todd gives his "final thought" after white trash momma mindlessly punctures the raft with her "lady of the manor engagement broach." Derwin, also facing death, has final thoughts - "I knew I'd never make it to 30, 'cause I'm a wild man! Before I die, I'm gonna fuck me a fish!"