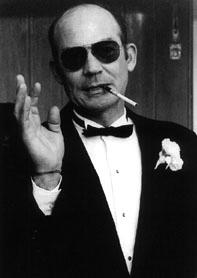 Thanks to my stupid cell phone provider, I didn't receive the message that I wasn't needed as a fill-in at the KRRO. Stopping for some gas, I picked up the paper to get me through the hour I now had to waste.
Page three had the tragic news - "Hunter S. Thompson, the acerbic counter-culture writer who popularized a new form of fictional journalism in books such as 'Fear and Loathing in Las Vegas', fatally shot himself Sunday night at his home, his son said. He was 67."
At first I was shocked...beyond shocked, really. It seemed like his life, at least his literary life, was back on track. His columns on ESPN.com (collected in last year's Hey Rube : Blood Sport, the Bush Doctrine, and the Downward Spiral of Dumbness Modern History from the Sports Desk, were as witty and insightful as anything from his glory days. Kingdom of Fear, released a couple years ago, was one of the more honest "memoirs" of recent memory, detailing both the highs and lows of his eventful life. And there were the two volumes of personal letters that more than any other release documented the rise of "gonzo journalism" and his late 70's burnout.
While I could never, nor would ever, even consider myself one-tenth of one percent as talented as the Great Doctor, he was definitely the most influential writer of my life. He took on all of the country's big evils - Hells Angels, Nixon, Vegas mobsters, Hoover, Aspen's Chamber of Commerce, straight-laced magazine and newspaper editors - with complete disregard to any personal repercussions. In doing so, he created a new method of writing - combing facts and fiction to paint a picture of a bigger Truth.
As I went through the motions on the dismal day, it slowly dawned on me that maybe Hunter's death wasn't so surprising. I'm sure we'll find out in the next few days why he pulled the trigger, so this is just pure speculation. I've gotta believe that there were some health problems. There were, after all, reports of some strange behavior at a L.A. book signing a few months ago. Most people just wrote that off as Hunter being Hunter. Could there have been other problems? I think it's safe to say that Thompson had no desire to spend his last years stuck in a hospital bed.
Whatever the reason, this is certainly a tragedy. In an era of Republican talking points disguised as journalism, we need a Thompson to shake things up. Hell, we need a few dozen Thompsons. If there's any good to come out of this, maybe more people will pick up any of the Fear and Loathing books, or the Great Shark Hunt.
Email Post