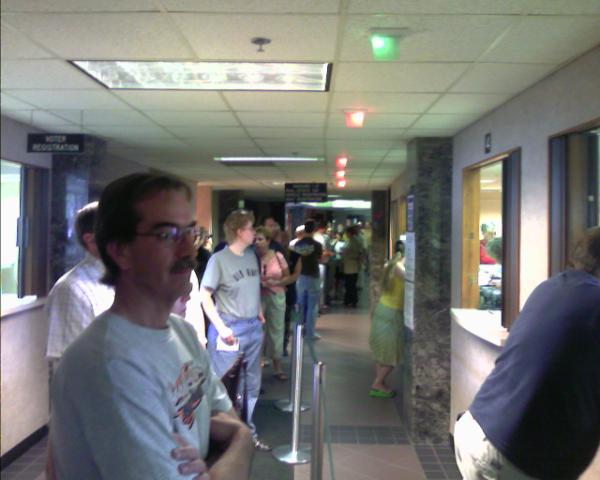 Exactly one year ago I told a story that many thought was quite exaggerated. It concerned my visit to the country courthouse to purchase tags for my family’s vehicles. There was no exaggeration; thanks to a faulty computer system it took over 90 minutes to complete my transaction.
I was going to be smart this year. When the renewals came in the mail, I intended on mailing them in so I could avoid this silliness. Well, I’m a well-known procrastinator so I found myself having to make that trek once again.
A few blocks away from my office, however, I realized that I had forgotten my checkbook. Since I had plenty of cash I didn’t believe this would be a problem. Remember this fact later in the story.
I should have known as soon as I entered the courthouse parking lot that this was going to be a nightmare. For a second I thought I had screwed up and traveled to Wal-Mart as cars were going every which way, and the parking maneuvers utilized by quite a few people left quite a bit to be desired.
Finally squeezing into the only open spot in the lot, I entered the building. The line at this point was just to the left of the entrance way; a bit long but I figured it wouldn’t take too long. Boy was I wrong!
Once again, the computers were down, and once again the mainframe in Pierre was blamed (despite the fact that a friend of a friend who worked in Pierre recently told me this was bull). One full year after my first nightmare and nothing had been improved. I guess a personal plane for the Governor is more important than improving our government’s computer system. Yet I don’t recall our video lottery computers ever going down. I guess we all know where our state’s priorities lie.
There was one improvement over last year, though. A courthouse employee was going through the line explaining the situation once again, but with a new twist. Those who were paying by check could leave their info and payment with her, and could then come back later to pick up their plates. If only I hadn’t spaced out my checkbook!
This plan alleviated a good portion of the line, so I decided to stick it out thinking that at any minute the computers could come back online. Very, very slowly, I moved up. I also began “entertaining” my comrades…or at least some of my fellow line-mates.
Close to 90 minutes later it was almost my turn, although the fine employees of the courthouse were doing everything they could to make things worse. Two cashiers were doing the right thing – they were collecting money and explaining when to check back on their plates. The others were idiotic – they had their customers sit and wait for their registrations. One old lady spent 45 minutes waiting before hers printed; a clem next to her was there for over a half hour. If everybody had just collected money, the line would have gone quickly.
Of course, the two smart women went on break around this time. In fact, almost everybody did. Despite the fact that the line now went almost to the other end of the courthouse, only four (out of twelve) windows were open when it was finally my turn.
Proclaiming that I’ll happily just pay, the obviously frustrated clerk took my money and told me to return after 1:00. Stupidly, I did. No luck. I came back at 4:00. Still no luck, but word had come down that the computers might not even be up today (Wednesday). At least the state had informed law enforcement of the problem, and a fifteen day grace period has been added for those whose tags expire tonight.
There really is no excuse for this problem. Sure, the last couple of days of the month is the busiest days of the month for the state’s computers. So what? Does Target’s registers break down on the day after Thanksgiving? How about Barnes and Noble, Best Buy, or Shopko? Hell, even Lewis Drug has few problems with their system. This is a small state; it shouldn’t take an elaborate network to keep up with the demand.
The staffing at our courthouse also leaves a lot to be desired. It’s been a running joke for years that there are always more employees on break than on the job. It’s no joke; even the much-maligned post office has a better system.
In conclusion, what did I learn this week? If possible, never ever go to the courthouse if possible. You’ll be annoyed from the minute you start navigating the parking lot, and that negativity won’t disappear until the moment you finally safely get the hell out of there. I know I won’t make the mistake of not sending in the renewal forms next year.
Email Post

Anonymous said…
I recently sent my tags in late and to my surprise, the tags came back in 3 or 4 working days. It surprised the heck out of me and I'd never stand in line again. I wouldn't worry about being a day or 3 late on tags. One of my co-workers bought a jeep in February and still only has paper plates on it and has never been ticketed.
7:50 PM