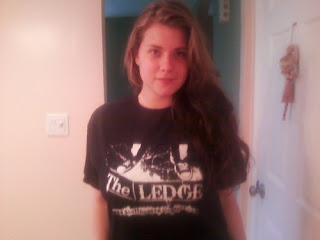 Twenty-one years ago, I was running a little record store in Aberdeen, SD. Every week or so, I'd receive a box of product from our Sioux Falls location, which occasionally included a new publication called Tempest. As much as I appreciated the existence of an independent voice in my hometown, I felt there was room for a bit of passionate snark in the music section.
I wrote a letter to the magazine, and was pleasantly surprised to be invited to participate. There began an eleven-year association with Tempest, with most of those years holding the title as Music Editor. More importantly, I gained quite a few long-term friends, most notably publisher Craig Ellerbroek.
While Ellerbroek sold Tempest in the late 90's, we remained pals, and would routinely meet up at local shows or little gatherings at his home. It was at one such small gathering that the genesis for The Ledge came about. While quite a few silly ideas come out of whiskey-cokes, this was one that actually received further thought and this past December came to fruition.
Obviously, when the concept of guest hosts came about this past spring, Ellerbroek was one of the first that came to mind. This week, he finally made the journey to The Ledge Studios, bringing along with him his favorite early 80's quirky power pop tunes that continue to influence him to this day. Drinks were poured, old stories were shared, and music was heard at loud volume. The way life should be every day.
Ellerbroek will be back in a few weeks for a second episode, this time devoted to the music that was our lifeline during the Tempest days. The music that we covered; the bands that we saw at the Pomp Room (and other venues); the tunes that were the soundtrack to long, long nights creating a magazine that actually had an impact on Sioux Falls culture.
As always, there are numerous ways to listen to this episode (and the 34 that came before it). Subscribe via iTunes, tune in to realpunkradio.com this Friday at 8 pm central time, or download it here.

5. Mental As Anything, Ready For You Now

7. Gang of Four, Return the Gift

8. The Boomtown Rats, Never Bite the Hand That Feeds

11. The Sinceros, Take Me To Your Leader

12. The Vapors, Waiting For the Weekend

13. The Vipers, Cheated and Lied

14. Rockpile, When I Write The Book

Rachel said…
I don't know why I didn't start listening to The Ledge sooner. I need to download this episode too.
9:57 PM

The Vapors "Turning Japanese" actually had a positive impact on your tribute to mediocrity list.
Kurt
11:12 PM

Anonymous said…
the finest moment of Tempest was in early 95 when they released the Argus spoof. It was simply the most brilliant piece of satire ever, in my opinion. spot-on and scathing from start to finish. I still actually have my original copy. Scott, if you still have a copy, please scan it and get it posted so we can all enjoy it's brilliance together.
7:54 AM

Anonymous said…
And yet...residents still vote for screwed up mayors no matter how many get-out-of town suggestions were put in the Tempest. The city that never learns - never takes the hint.
Kurt
12:10 AM

Anonymous said…
too bad there isn't a time machine so that tempest pat lalley can spoof argus pat lalley.
9:12 PM

Anonymous said…
spoofing Bob Keyes was the best. the pic of the dude with the football helmet on.....f*cking hilarious. the mock letters to the editor were funny as hell also. will somebody please scan that issue and get it online !!!!!!
6:05 PM

Scott said…
Hmmm, who was the dude in the football helmet? lol
6:08 PM