I’m a little late getting this one written, as I try to blog as soon as possible after my little journeys around the neighborhood. It’s hot out today, though!!! 84 degrees at 6 PM, so I needed some time to rehydrate and shower. 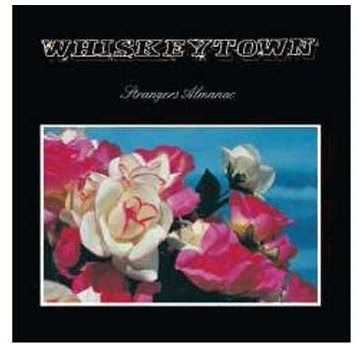 Unlike most of the last few letters, today’s choice was pretty easy. I became a Whiskeytown fan the moment I heard their debut album, Faithless Street. One of the leaders of the post-Uncle Tupelo time where it looked like rootsy alt-rock may actually become a commercial movement, Whiskeytown at times rocked the hardest. “At times” is the key words, though, as one moment they could recapture the greatness of Gram Parsons, but they could also be as middle-of-the-road poppy as Fleetwood Mac.
The key to the band was their troubled yet charismatic leader, Ryan Adams. Few writers are as prolific as Adams; even fewer showcased such serious ADHD. He really was the alt-country Paul Westerberg, capable of making you tear up with his ballads yet destroy your belongings with the rockers, Adams’ inability to make it commercially was mainly due to the fact he was his own worst enemy.
Oh, who am I kidding. There’s one major difference between Adams and Westerberg. Ryan is just too damned...um, precious. He’s a diva. Westerberg has spent a career just shrugging at his musical missteps; Adams usually throws a fit. He’s had a history of calling journalists late at night complaining about a review. He’s made the tabloids with drunken idiocy.
I’m digressing, though. Let’s get back to my walk, and my choice of the second Whiskeytown album, Strangers Almanac. Simply put, it’s a masterpiece, and may be the greatest album of the alt-country movement. It’s everything good about Adams thrown into a blender, combining elements of the Replacements energy, Exile on Main Street-ish Southern country soul, and the heartbreak of the already-mentioned Gram Parsons at his best.
Besides the songs, it’s perfectly produced. It’s lush when it needs to be, and bare bones at others. It has a live feel to it, particularly in the little guitar pieces that jump in and out of the mixes, but it’s not sloppy.
Why this record didn’t push the band to a higher profile is beyond me. It must be because I love it so much. Anyway, it did push me to go farther today than I’ve gone all summer...and I’m now exhausted. Anybody got a whiskey for me?
Email Post
Labels: scott hudson strangers almanac walking rock alphabet whiskeytown