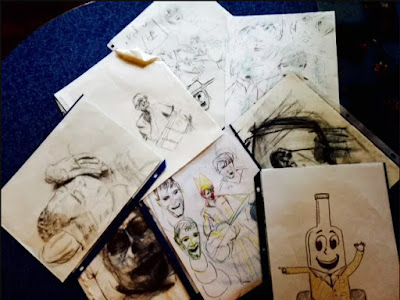 After a long, long wait, it appears that Mr. Westerbeg has come out of his basement. A few weeks ago a new site called Dry Wood Garage suddenly appeared, and since its inception a total of five Soundcloud links have beeen added.

But is it actually Paul Westerberg? Yeah, two seconds into the first track, "2 Hawk 1" (or whatever it's called) and there's no doubt. The voice is his. The guitar tone is his. Taken as a whole, these tunes remind me of some of the material in 2008's "49:00" mishmash of tunes. Let's hope there's more to come!

A number of other new tracks are premiered in this episode, including a live Replacements cut from a 1986 show in Hoboken that will be released on October 6. Carrying on the Replacements connection, the new record by The Yawpers was produced by Tommy Stinson. There's also new tracks by High on Stress, John Murry, Guided By Voices, The Fall, and many more!

Grab this via the usual sources, including iTunes and Stitcher, or...