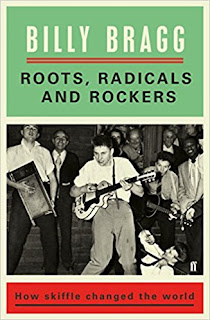 Last year, Billy Bragg and Joe Henry put out a charming album of covers called “Shine a Light”. To record this record, they boarded a train in Chicago and headed to L.A. On the way they recorded a bunch of train songs at various stops on the trip. Sometimes in train station waiting rooms. Sometimes at trackside. A song or two was even recorded in the very same hotel room that Robert Johnson recorded his legendary tunes.


One of the songs they recorded - “Rock Island Line”, one of the most important songs in British music history. A few weeks ago, a new book by Bragg called Roots, Radicals, and Rockers: How Skiffle Changed the World tells the story of “Rock Island Line” and everything that resulted from its release.


We’ve always been led to believe that British R&R began with the Beatles, Stones, etc, and they were influenced by Chuck Berry and American blues. Those influences aren’t entirely wrong, but the Big Bang actually happened a few years earlier with Skiffle. Charlie Watts, Mick jagger, and Bill Wyman of the Stones were in skiffle bands, as were Ian MacLagan of the Small Faces, Dave Davies of the Kinks, Graham Nash and Allan Clarke of the Hollies, Roger Daltrey first formed the Detours as a skiffle band before they became the Who. Jimmy Page’s first TV appearance was with his skiffle band. Even in the 70’s - Ian Hunter, Rod Stewart, Ron Wood, Dr. Feelgood, Van Morrison all played skiffle. And not to mention the Quarrymen, who of course turned into the Beatles.


To understand skiffle, you have to keep in mind that in the 50’s the British music industry catered exclusively to adults. The BBC had no TV or radio programming for teens. Even after skiffle arrived they did everything they could to eliminate it.


Skiffle’s beginnings, though, were in American ragtime music. Ken Colyer was so fascinated by jazz that he joined the British navy just to be able to visit America and watch jazz bands. He ended up being deported, though, via the Red Scare-inspired McCarran/Walter Act because he had the audacity to sit in with black musicians in New Orleans.


He went back to the UK and started a trad jazz band, the Ken Colyer All-Stars. Chris Barber and Alexis Korner were part of this band, and anybody who knows the early history of the Stones recognizes those names. To fill up time, they used to have intervals in their shows where a couple of musicians would do these little folk/blues breakdown sets that included Leadbelly songs. One of these musicians was Lonnie Donegan, and to fill time on their first record they recorded a couple of these tunes. One of them was “Rock Island Line”.


A year or so later, “Rock Island Line” suddenly became a hit. A huge hit. It was the first time a song led by guitar hit the charts. Previously the guitar had been an accessory that was barely heard. Now kids all over the UK were seeing this instrument used in a frenetic, aggressive manner and they were hooked.


You only needed to know a couple of chords, and the rest of the instrumentation came from standup bass, washboards, maybe a banjo or violin. A teen market was instantly created. There were so many bands that Promoters discovered they could sell hundreds of tickets to “battle of the bands” type shows.


Of course it didn’t last long. The trad crowd moved on to folk and blues. Record companies took back their power just as they did in the US by creating cleaned-up teen idols who did what the labels wanted.

Tonight's show includes some of the precursors to skiffle, and concludes with some of the great British rock that came as skiffle died away. Bragg's book is really great, by the way, and is definitely worth reading. You can find a copy HERE!!!

Grab this show from the usual sources, or...