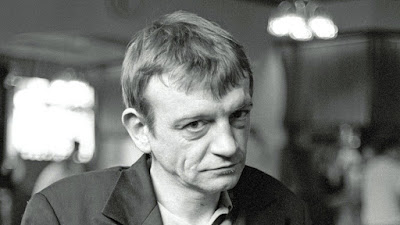 Less than an hour after I read that Mark E. Smith of The Fall had died, I made an appearance on my friend Patrick Lalley's talk radio show. Obviously, I chatted about his death, and about his legendary 40 year career.

Yet I have to admit I was at a loss for words when Lalley asked me to name the band's biggest song. It's not that they didn't have noteworthy songs. They obviously did. The problem is the sheer number of records Smith made over the years. Well over 30 full-length albums, and seemingly an equal number of live and compilation albums. There's a six-disc set of Peel Sessions, and last year's Singles collection needed seven discs to be truly comprehensive.

So yes, I failed under pressure before quickly throwing out a few song titles. Tonight's the night I give the man the tribute he deserves. Besides a number of songs from throughout the band's catalog, there are sets devoted to Fall songs covered by other artists, the original versions of songs The Fall covered, extracurricural collaborations featuring Smith, and even a number of songs written about the man. There's even a short set featuring music released by his ex-wife, Brix Smith.

Even though it was produced under sad circumstances, this was a fun show to put together. Friends helped out with song selections. Audio clips of Mr. Smith came from a wealth of material from YouTube. My hope is that all of you guys who have never really listened to The Fall will go out and buy a record or two.

This episode is avaialable at all of your favorite podcast services, or you can...