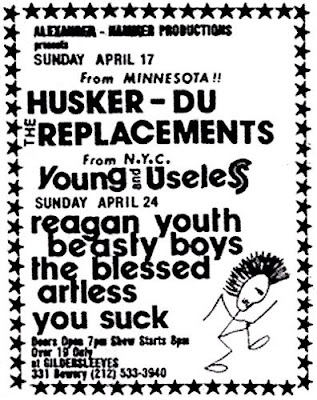 This oversight needed to be fixed, as 1983 was an important year not only for me but for indie and college rock. It's the year that saw the rise of three great Minneapolis bands - Husker Du, The Replacements, and The Suburbs. Yes, they'd all been around for a couple of years but the records these bands put out that year (Metal Circus, Hootenanny, and Love Is the Law) were huge for fans of that city's music scene.

It was also a year that a number of acts saw a little sniff of mainstream attention. Public Image, LTD. had their biggest hit ever. Elvis Costello finally had some American radio play. R.E.M. hit the top 20 of the album charts with their first full-length album, and The Plimsouls were the house band in the cult classic "Valley Girl".

It's quite a fun listen, and hopefully everybody discovers a track or two they've never heard before! You can find this show at almost any podcast site, including iTunes and Stitcher. Or...

1. Jonathan Richman, That Summer Feeling
2. The Rolling Stones, She Was Hot
3. The Prisoners, Better in Black
4. The Beat, All Over The World
5. The Plimsouls, Shaky City
6. R.E.M., Shaking Through
7. Pylon, Crazy
8. Let's Active, Every Word Means No
9. Nick Lowe, Ragin' Eyes
10. Elvis Costello & The Attractions, Let Them All Talk
11. The Replacements, Color Me Impressed
12. The Replacements, Hayday
13. The Replacements, Treatment Bound (AlternateVersion)
14. Suburbs, Love Is The Law
15. Suburbs, Rattle My Bones
16. Suburbs, Skin
17. The Phones, Modern Man
18. Husker Du, Everything Falls Apart
19. Husker Du, It's Not Funny Anymore
20. Husker Du, Diane
21. Minutemen, Cut
22. No Direction, I Don't Ever Think About You
23. No Direction, Where's the Beach?
24. No Direction, Reaganomics
25. Social Distortion, Under My Thumb
26. Bollock Brothers, Pretty Vacant
27. Mystery Girls, These Boots Are Made For Walkin'
28. The Ramones, Little Bit O' Soul
29. Violent Femmes, Prove My Love
30. The Church, Electric Lash
31. Hoodoo Gurus, Tojo
32. Public Image Ltd., (This Is Not A) Love Song