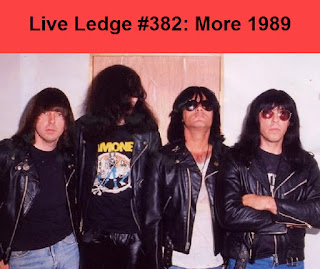 Sometimes one has to make last second adjustments to their plans. That's the case with this week's Live Ledge. I was all prepared to go live with part two of my look at the year 1989 when literally ten minutes before showtime came word that the great Roky Erickson had passed at the age of 71.

The former leader of the 13th Floor Elevators is obviously a major factor in the history of psychedelic garage rock. "You're Gonna Miss Me" was the big hit but almost everything on those first two Elevators albums is fantastic. Erickson's personal demons put that band to rest, though, and he was hospitalized multiple times in the late 60's and 70's for paranoid schizophrenia. He's had a number of musical comebacks over the years, however, including some great work with Texas rockers The Nervebreakres at the end of the 70's and numerous records over the last 25 years or so. For more info, every rock fan should check out the 2005 documentary, You're Gonna Miss Me.

After a half hour or so of Erickson tunes, it's back to the original planned format. This week's 1989 playlist goes international, with multiple sets on some of the great British indi rock of the year. There's also a couple of sets dedicated to newer bands who greatly made their mark in the next decade.