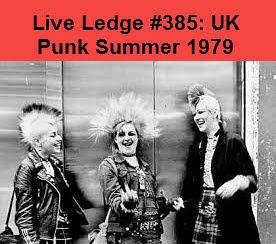 The latest in the series of shows dedicated to that wonderful year 1979 carries on with a look at the various records released in the UK that summer. It was a time where a few bands were carrying on as usual (Ruts, UK Subs, Buzzcocks) while others had split into subsequent projects (Public Image Ltd., Brian James). And like the previous episodes, there are a ton of bands who just seemed to disappear after one fabulous recorded moment.