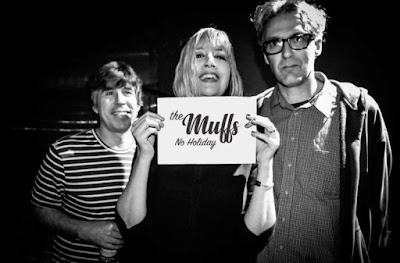 It should be no surprise to anyone that the latest album by The Muffs, No Holiday, is the feature record of this month's new release episode. Even without the tragic death of leader Kim Shattuck, this episode was bound to feature a handful of tracks from this release.
But there was definitely no doubt after tearfully reading bandmate Roy McDonald's story on Shattuck's last months in the LA Times, and her desire to finish what is ultimately the band's final record. It's truly remarkable that this record even was finished, let alone as great as it is.
This episode also features great new tracks by the likes of Jeffrey Lewis, Mikal Cronin, Guided By Voices, Mark Lanegan, and so many more. There's also a plethora of email submissions by up and coming acts such as Uncle, Reverse, Taking On Water, Teenage Bubblegums, and Tio Rico. Of course, there's brand new Rum Bar releases by The Dirty Trucker's Tom Baker and The Speedways.
After listening, please go purchase those tracks you enjoy! You can find this show at almost any podcast site, including iTunes and Stitcher...or