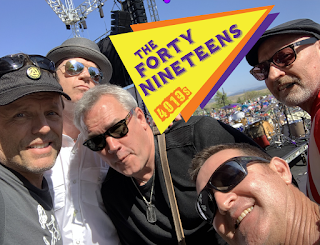 I consider the February new release episode of The Ledge to be the first real episode of the year. Sure, the January show had quite a few 2020 releases but it was dominated by 2019 leftovers. This episode, with a few exceptions, are the fruits of the new year.

This show features quite a few of the first major new albums of the year, such as the latest by Beach Slang, The Supersuckers, and Drive-By Truckers. There's also a great musical twist with the new Black Lips album, and a few single releases by bands such as Twin Peaks.

The real highlight of the broadcast, however, may be this month's Rum Bar Records set. This is a label that's on a roll, with a crowded release schedule that's as strong as ever. There's also a new home for The Ledge favorites The Forty Nineteens, who now find themselves on a fabulous up and coming power pop label, Big Stir Records. I'm hoping for more great music from that company in the future.