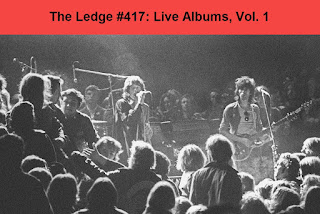 A few days ago I started a thread on my Facebook page asking for favorite live albums. The response I received was amazing, as close to 150 people responded with a wide range of suggestions.

Obviously the question was raised in order to put together a Ledge episode, and the response was so overwhelming that tonight's show is the first of two dedicated to the topic. This week's broadcast consists of the choices I would have picked anyway but I still give credit to those who are so likeminded. It's a collection of legendary classic recordings (Jerry Lee Lewis, Rolling Stones, Sam Cooke, etc.), recordings that were initially bootlegged before getting an official release (Iggy & The Stooges, Elvis Costello, The Beatles, The Replacements), and quite a few others that have had a place in my collection for decades.

Part two, which will be broadcast in two weeks, will focus more on material that others have picked. Some of them are records I've forgotten about, others come from my youth, but quite a few are releases you probably would never expect to hear on The Ledge.

And, of course, I have to thank everybody for their picks. It's been a fun two hours! After listening, please go purchase those tracks you enjoy! You can find this show at almost any podcast site, including iTunes and Stitcher...or


1. The Rolling Stones, Jumpin' Jack Flash
2. The Rolling Stones, Gimme Shelter
3. The Rolling Stones, Around And Around
4. The Rolling Stones, Respectable
5. Jerry Lee Lewis, High School Confidential
6. James Brown, Night Train
7. Sam Cooke, Twistin' The Night Away
8. Bob Dylan, I Don't Believe You (She Acts Like We Never Have Met)
9. Johnny Cash, Cocaine Blues
10. The Beatles, Hippy Hippy Shake
11. The Kinks, A Well Respected Man
12. The Kinks, Victoria
13. The Who, Young Man Blues
14. David Bowie, Watch That Man
15. David Bowie, Hang On To Yourself
16. Iggy and the Stooges, Raw Power
17. Mott The Hoople, One Of The Boys
18. Ian Hunter, Once Bitten, Twice Shy
19. Lou Reed, Kill Your Sons
20. The Replacements, I Will Dare
21. The Replacements, Bastards of Young
22. The Replacements, Another Girl, Another Planet
23. Hüsker Dü, The Girl Who Lives On Heaven Hill
24. The Clash, Clash City Rockers
25. Elvis Costello & The Attractions, Less Than Zero (Dallas Version)
26. Graham Parker & The Rumour, Back To School Days