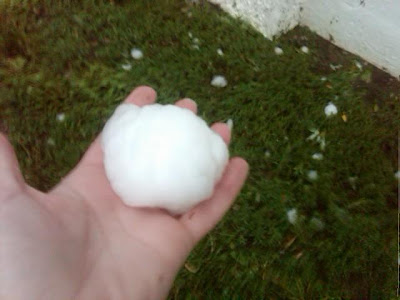 I've always had three questions when it comes to local television coverage of weather situations:

1. When did the definition of "storm" change from serious weather to any time there's a possibility of a dark cloud?

2. Is a storm really a storm if there's no weather practitioners to cover it?

3. What exactly did we do before Doppler?

These questions have constantly returned to my head following the events of the past couple of weeks, and I have no doubt I'll continue shaking my head for as long as I'm alive.

You may recall that a couple of weeks ago, all three of our local stations hauled out all of their Lite-Brites, 3D ovals, and other even less impressive toys out of the closets for marathon coverage of potential weather situations that didn't come anywhere near the more populated areas of our state. Anchors on all three stations repeated the same lines over and over and over throughout the evening.

Granted, the stations did luck out as a couple of tornados did cause some damage in the northern portion of the state. Overall, though, they needlessly scared tens of thousands of blue-hairs from Rapid City to Sioux Falls (and beyond). I firmly believe that the only reason they went balls-out was because a). they were fully staffed and b). Saturdays are a network disaster consisting of primarily re-airings of shows from the previous week. There's no way the finale of Lost the next night would have been pre-empted by this silliness.

Two days later, however, our portion of the state did receive some nasty weather. Conditions were awful enough that our local cable signal was cut into by the EAB to warn us that a storm was imminent. I still screamed at my television, though, as the lengthy warning occurred with 24 seconds left in what could have been the climatic game of the Celtics/Magic series.

When the game finally ended, I went to bed just as the weather fired up. Wondering what was actually happening, I turned on my TV to discover that NOBODY was covering this situation other than a small map showing the cloud coverage. I guess 75 mph winds in the state's biggest city isn't enough reason to call in Trobec, Cable, or whatever intern worked the 10 pm duties at KDLT. 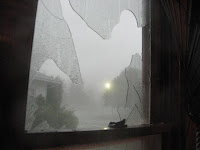 The weather crews must also have had the holiday weekend off, as another storm hit the central part of the state this past Saturday. A good friend of mine who lives in the Winner area had just finished mowing her lawn and was about to cook dinner when the clouds rolled in. "(My husband) had just gotten home at this point, and we headed to our basement laundry room for me to clean up from mowing, and him to clean up from a day at the farm. He had showered while I folded some laundry, and then I got in the shower. I had been hearing a steady rumble and roar of thunder, but thought it was just a normal thunderstorm." 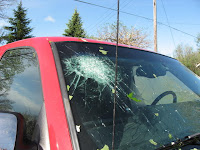 An hour later, she was cleaning up broken glass as softball-sized hail broke through her roof, destroyed her vehicles and shattered every window on two sides of her home. "It was as if someone was shooting at the house as I could hear glass shattering everywhere" she told me. "We (had) six inches of hail and water standing in our driveway. The yard looked like it had snowed." A neighbor discovered their bed was now the resting place for one of their windows. (Good thing they weren't...well, you know...when this happened.) Conservative estimates put their damage at $20,000; many neighbors were even higher. "The town is a total mess." 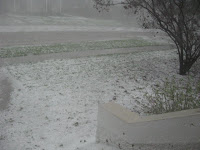 Yet once again there was nothing on our local stations. As the twitter pics and descriptions began rolling in, I went through the channels and could find nothing other than that little corner map that didn't indicate what these towns were going though.

The fact that I obtained better weather coverage via twitter is embarrassing, yet we go through this every summer. We get "worst case scenario" predictions when the entire crew is available, and almost complete indifference the next day. All I ask for is consistency. If you want me to take you seriously, come on the air when it's truly needed...and ONLY when it's warranted. Crying wolf for every dark cloud will cause people to shrug their shoulders whenever you do interrupt programming. Picking and choosing your opportunities seemingly based on staffing results in a lack of confidence. I understand it's a fine line, but few people can argue that so far this summer your track record is suspect.

Friday night a small speeding truck, hit a huge diesel truck, which hit a car, continued on and hit another car, kept going and hit a house.

But since the driver was ok, and not drinking and driving, or txting, and just speeding through the hood (like everyone) no one covered it.
8:17 AM

the goddess said…
just another reason i'm glad have left the 'sioux empire.' i couldn't stand the local news or newscasters.
8:51 AM