I’m sure you’re a bit shocked to see a post this afternoon. After all, it is Halloween and I have tons of candy to give out (but probably will end up handing out a fraction of the treats).
I had to get out for a walk this afternoon, as I missed the last couple of days. A Rant-a-Bit podcast session on Monday, plus post-work drinks last night, are my sorry excuses. Plus, it was over sixty degrees with absolutely no wind on this fine October afternoon. 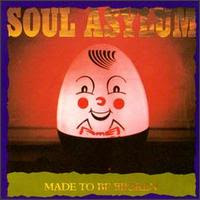 Today’s music choice was pretty easy to make, as I have been thinking about this band quite a bit the last few days. The album in question is Made to Be Broken, the second release by Soul Asylum.
Why was this band on my mind? Earlier this month, founding guitarist Dan Murphy announced his resignation from Soul Asylum after thirty years of tenure. According to the statement he released, it wasn’t due to singer Dave Pirner or anybody else in the band. It was the music industry itself.
I have a feeling this is going to be a common move over the next few years. With commercial radio and television reluctant to broadcast any music that’s not released by a “celebrity”, it is becoming next to impossible for any artist to get noticed these days. You can build the greatest Facebook or Tumblr page, but it does little good beyond the already-converted. Not to mention the controversy over illegal downloading, but that’s a debate for another time.
Just how long can an artist survive on hundred dollar gigs in every dive bar in the country? What good is an album release if only your longtime fans are willing to spend a few bucks?
At least Soul Asylum had their moment in the sun, which at the time was a shocking development in their career. For years they were considered the little brothers of Minneapolis legends Husker Du and The Replacements, and had ties to both bands. Besides sharing hundreds of concert bills, Husker Du guitarist Bob Mould produced many of their early albums (including today’s selection), and they were on the same label as the ‘mats.
Yet it was Soul Asylum who received the big commercial break. 1992’s Grave Dancer’s Union dominated the charts, primarily due to “Runaway Train”, which, of course, raised plenty of cries of “sell out”. But while “Runaway Train” did become an annoyance, the album was actually pretty strong. Yes, it had major label gloss, but it also had quite a few great songs, including the track that spawned the album’s title, “Without a Trace”.
Unfortunately, the band could never recreate that success, and in my mind it was a simple deficiency - lyrics. Dave Pirner simply is not a gifted lyricist, which was evident on the embarrassment of a followup single, 1995’s “Misery”, from Let Your Dim Light Shine.
Weak lyrics can be hidden when the band is making a big, energetic wall of noise, and that is what was missing on their major label releases. 1983’s Made to Be Broken, however, is all raucous guitars and expressive vocals. It’s also one of their most diverse albums, full of lots of the typical Replacements-ish style of punk but also dabbling in country and metal. It’s full of tracks that they played up to the very end of their career - “Tied to the Tracks”, “Ship of Fools”, and especially “Never Really Been”, which contains the classic line, “and where will you be in 1993”? In SA’s case, they were topping the charts.
Best of luck to Dan Murphy, and I really hope that he really isn’t quitting the music business for good. Over the years he has moonlighted in The Jayhawks and Golden Smog, and I’m sure there are plenty of people like me who would like to see him again share a stage with the likes of Gary Louris and Jeff Tweedy.
Email Post
Labels: dan murphy dave pirner scott hudson soul asylum walking alphabet