The fact that I’m out on a holiday either means I’m dedicated or that I have no life. I would say it’s the latter. While everybody else is at the pool, the park, or parties and parades, my highlight of the day is putting on my walking shoes and losing myself in the music. 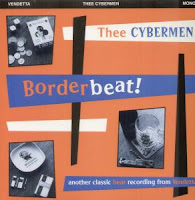 The letter “T” is an easy one for the music selection, but I wanted to stick to a subset of it. My friend “Mag” once said that the true sign of a pounding rock ‘n’ roll band is if their name starts with “Thee” instead of “The”. It’s a pretty exclusive club, but the band of choice for today is Thee Cybermen, a 90’s British garage-rock band that is clearly influenced by another group from that club, Thee Headcoats.
It’s all mid-60’s freakbeat rock, sped up a bit to include the influence of punk rock and Billy Childish. It must have been the perfect album for the day, as I set new records in total time, distance, and even speed.


Much of that success is also due to the weather. Knowing it was going to be extremely hot later in the day, I made this a noon-ish jaunt. WIth moderate temperatures and a nice little breeze, I expanded my route, and just kept going and going. At least today is good for something.
Email Post
Labels: scott hudson thee cybermen walking rock alphabet