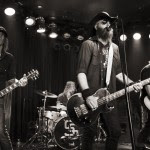 Tonight's special interview was with Supersuckers leader Eddie Spaghetti, who will appear in Sioux Falls next Friday night (8/22) at Big's. Eddie talked about the band's new album, Get The Hell, plans for a sequel to 1997's Must've Been High, and various other issues surrounding the band.
The rest of the show is a look back at 1994, the year the Supersuckers released La Mano Cornuda. It was also one of the last year's that the record industry focused more on records than industry. The label consolidations that tore apart the business were still a few years away, and the management-created rise of boy bands were not yet the main mission of the promotion departments. Labels were still tossing money to bands with a bit of an edge, with the result being that acts such as the Meat Puppets actually had an impact on the charts.
Tonight is part one of two shows devoted to the year, and it's admittedly more commercial than a normal Live Ledge. Tune in next week for a noisier set of tracks from 1994.
Grab this episode from the usual sources, or...