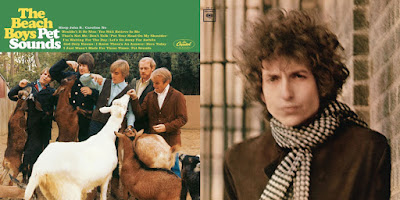 May 16, 1966 is considered by many to be the greatest new release day of all time. Not only did Bob Dylan complete his triumphant trio of electric albums with Blonde on Blonde, but the Beach Boys put out the only album I'd even consider to listen by them. That, of course, is Pet Sounds, which is more of a Brian Wilson solo album anyway. Both of these records routinely top, or come close to topping, the dreaded "Best Album of All Time" articles that plague most music magazines.
1966 is known for much more, however. In fact, British music journalist Jon Savage's new book, "1966: The Year the Decade Exploded", makes the case that 1966 is the year that rock and roll's most important year. I can't really disagree. Besides the Dylan and Beach Boys albums, The Beatles released "Revolver". The Kinks carried on with classic albums and singles, most notably the "Face to Face" album. "Aftermath" became the first Stones album with nothing but original tracks.
Yet it wasn't just the big names that progressed beyond lovable moptops. It could be argued that 1966 was garage rock's birth. All of those kids that bought guitars because of the Beatles or Stones on Ed Sullivan had now moved from just aping their heroes to writing their own furious tracks. The term "Nuggets" came about from the tracks of that time, and there are a ton of these songs that are regularly covered every night in some dark bar.
Tonight's show concentrates mostly on the hits of that year. Even without playing anything from Stax or Motown, which also had a triumphant year, there's more material than time allows. Sometime in the near future will be a sequel that will focus on more unknown garage rock singles; the kind that is found in the "Back From the Grave" series and other fabulous compilations.
As always, grab this one from iTunes or Stitcher, or...

1. Kim Fowley, The Trip
2. Cool Ghouls, Here Today
3. The UFO Club, Hang On To Your Ego
4. Phosphorescent, I Want You
5. Night Beats, Obviously 5 Believers
6. The Beatles, Paperback Writer
7. The Beatles, Rain
8. The Rolling Stones, Doncha Bother Me
9. The Who, A Quick One
10. The Kinks, Rosie Won't You Please Come Home
11. The Pretty Things, A House In The Country
12. The Yardbirds, Train Kept A Rollin'
13. The Small Faces, You Need Loving
14. The Byrds, Mr. Spaceman
15. Them, It's All Over Now Baby Blue
16. The Animals, Don't Bring Me Down
17. The Remains, Don't Look Back
18. The Monkees, Sweet Young Thing
19. Troggs, I Can't Control Myself
20. The Turtles, Outside Chance
21. Paul Revere & The Raiders, Kicks
22. The Litter, Action Woman
23. The Electric Prunes, I Had Too Much To Dream (Last Night)
24. The Standells, Riot On Sunset Strip
25. Love, Can't Explain
26. The Tidal Waves, Farmer John
27. The Leaves, Hey Joe
28. The Music Machine, Talk Talk
29. Syndicate Of Sound, Little Girl
30. Count Five, Psychotic Reaction
31. The Monks, Boys Are Boys And Girls Are Choice
32. Captain Beefheart & The Magic Band, Diddy Wah Diddy
33. 13th Floor Elevators, Reverberation (Doubt)
34. The Other Half, Mr. Pharmacist
35. The Seeds, The Tripmaker
36. The Del-Vetts, Last Time Around
Email Post
Labels: 1966 live ledge scott hudson

Anonymous said…
Jimi Hendrix left NY in tow by Animal's bassist,and went to London in September 1966, and the blues guitar soup bubbling there EXPLODED.
10:32 AM