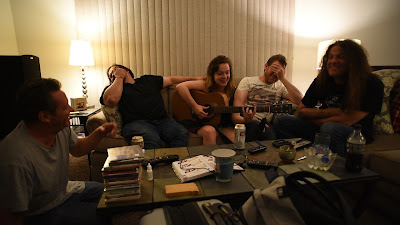 Today is a big day for folks like me, as the new Lydia Loveless record, "Real", has been officially released. Thanks to Gorman Bechard allowing me to tag along during the making of "Who Is Lydia Loveless", I've been living with these songs for well over a year. (I've related the stories of those weeks way too often, so this week I'll spare you those details.)

A few days ago, I had the opportunity to talk to Lydia about the record finally being released, along with other topics involving songwriting, touring, and even a little dinner party held at my house during a day off for the band.

It just so happens that on this same day, there's been another music video released. Once again directed by Bechard, it's for the stunning acoustic track, "Clumps".

Lydia and her band will be coming back to Sioux Falls on September 25, opening for the Drive-By Truckers. To read a transcript of most of this interview, click HERE!!!

I must give a special thanks to the fine folks at Bloodshot Records for setting this up, along with Lydia and the rest of her band. Besides the great music, they made me feel completely at home last summer while they were making this record.

As always, this show (and all episodes of The Ledge) are available on iTunes, Stitcher, and quite a few other podcast services. Or you can...