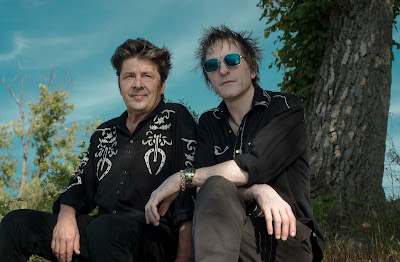 Sometime around mid-September, I received a call from my friend Jeff at Vishnu Bunny Tattoo and Piercing. He told me that he was contacted by somebody representing Tommy Stinson in regards to him performing in his venue. Would I like to help him promote that show?

I think you know my answer, and it turned into one of my favorite moments as a writer. Tommy called me as he was driving through the California desert, and warned me that we may be disconnected at some point. We did; twice in fact, but he immediately called back both times and picked up exactly where he left off.

At one point, Stinson described himself as an open book. He's completely right. There was a willingness to answer any question regarding his entire career, including his tenure in Guns and Roses and the failure of the Replacements reunion to put out an album of new material. (Don't get me wrong. I know I'm not exactly an investigative reporter.)

This week's episode includes the entire interview, along with Stinson-related songs. Most of the included tracks reference a subject from the chat, including a segment featuring songs from his production work with Together Pangea and Midnight Reruns.

The Vishnu Bunny appearance is this Friday night (October 28), and starts at 7 PM. If you're in the Sioux Falls area, you owe it to yourself to witness a rare intimate performance.

Grab this episode via the usual sources, including Google Play, Stitcher, and iTunes, or...

Amongst my favorites with Chilton LL#8&L14, Westerberg L27 or The Replacements L24, LL168. I knew about the Bash & Pop CD back then but little about the other releases.

Could You please add the LL263 setlist ? Because I'm White and Lazy...

The Nose Candy show was fun too !