Live Ledge #266: Waiting To Be Forgotten 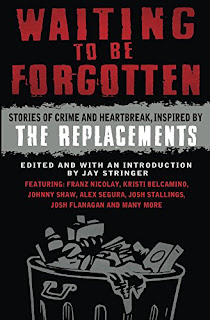 It was just a few days ago that Gorman Bechard contacted me about his involvement in a new Replacements-oriented project. Curated and edited by crime fiction author Jay Stringer, "Waiting To Be Forgotten: Stories of Crime and Heartbreak, Inspired by The Replacements" features 25 short stories of missed opportunities, fatal errors, love, hate, confusion and betrayal. Kind of like the works of Paul Westerberg, right? Each writer took a Replacements song and created their tragic tales around it.

Bechard and Stringer were kind enough to join me on tonight's show, as was former Hold Steady keyboardist Franz Nicolay. The trio discussed how they picked the song they used to formulate their story, their writing methods, and much, much more.

After that segment, there is also a recent interview I did with CFM leader Charles Moothart. A longtime collaborator with Ty Segall and Mikal Cronin, CFM's debut record, "Still Life Of Citrus and Crime" is one of the best recently-released garage-rock records. CFM will appear at Total Drag Records in Sioux Falls on Monday, November 28.

There are plenty of methods to listen to tonight's show, including Stitcher, Google Play, and iTunes. Or you can simply...