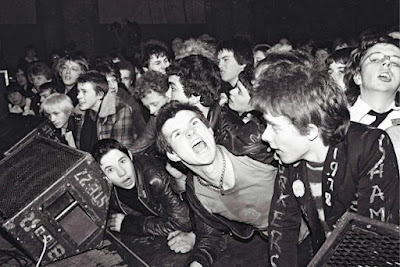 There are many landmark years in my life, but when it comes to music I'd have to say 1978 was the most important. That was the year that my tastes completely swayed from the norm. Sure, I had some stuff that my friends at that time would never check out. The Runaways. The Sex Pistols. The Clash.

But for the most part, my access to that type of material here in small town South Dakota was next to none, so I did end up having to endure the Midwest rock that was the soundtrack of every local kegger. I knew there had to be something better, though, and it was in 1978 that I began discovering it.

Yet there was still some mainstream rock that I have to admit I enjoyed, and the first couple of sets are some examples. I was a big Aerosmith fan...until they got clean and wrote the stupidest songs of all time. I'll always love Cheap Trick, and they really are a bridge between "RAWK" and power pop.

And then there's the Stones. This was the year of "Some Girls", and I completely fell in love with Keith Richards' guitar tones. Before I only really knew them as an oldies act, and I guess in some ways there sort of were, but "Some Girls" was such a monster in my life.

The rest of the show then features more traditional Scott Hudson music from that great year. Elvis Costello, Sham 69, the Undertones, the Boomtown Rats. It was a great year. There was so much fabulous music that year that there wasn't enough time to do it justice. At some point this year there will be a part two.

Grab this at the usual sources, including iTunes and Stitcher, or...

1. The Ramones, Rock 'N' Roll High School
2. Aerosmith, Back in The Saddle
3. Angel City, Can't Shake It
4. Cheap Trick, California Man
5. Tom Petty & The Heartbreakers, I Need To Know
6. Tom Petty & The Heartbreakers, Listen To Her Heart
7. The Rolling Stones, Respectable
8. The Rolling Stones, Before They Make Me Run
9. Peter Tosh, (You Gotta Walk) Don't Look Back
10. The Boomtown Rats, (I Never Loved) Eva Braun
11. Ian Dury, Hit Me With Your Rhythm Stick
12. Dave Edmunds, Trouble Boys
13. Nick Lowe, Heart Of The City
14. Nick Lowe, So It Goes
15. Elvis Costello & The Attractions, Accidents Will Happen
16. Wreckless Eric, Take The Cash
17. The Buzzcocks, Ever Fallen In Love (With Someone You Shouldn't)
18. Stiff Little Fingers, Suspect Device
19. The Undertones, Teeange Kicks No Thanks!
20. The Only Ones, Another Girl Another Planet
21. Magazine, Shot By Both Sides
22. XTC, This Is Pop?
23. Wire, I Am The Fly
24. Sham 69, If The Kids Are United
25. Sham 69, Borstal Breakout
26. The Adverts, Gary Gilmore's Eyes
27. Vic Godard & The Subway Sect, Ambition
28. 999, Homicide
29. Generation X, Ready Steady Go
30. The Saints, Know Your Product
31. Radio Birdman, New Race
32. Public Image Ltd., Public Image
33. The Fall, Bingo Master
Email Post
Labels: 1978 live ledge podcast scott hudson