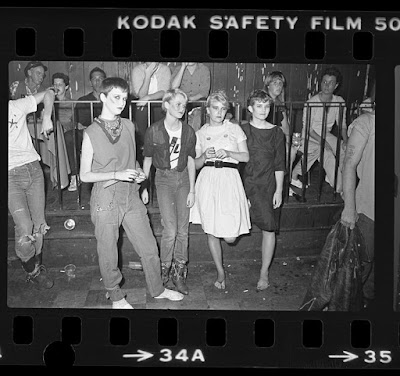 Earlier this year I did a couple of show dedicated to that wonderful year of 1978. Since then the seach has continued for any great tunes released that year. At the time I assumed I'd put together one more show devoted to that year. Ok, maybe two.

Thanks to the discovery of some great blogs and compilations, this series is going to carry on as a continuing series throughout the year. I have music coming up from Canada, Italy, Denmark, Australia, and even the Eastern Bloc.

Tonight's show is devoted to the West Coast and Midwest of the U.S. Great scenes in Los Angeles, San Francisco, Detroit, Minneapolis, and so many others resulted in many classic tracks. Too bad that so much of that era's music is not only forgotten but remains untouched by reissue companies.

It's quite a fun listen, and hopefully everybody discovers a track or two they've never heard before! You can find this show at almost any podcast site, including iTunes and Stitcher. Or...


1. Fear, I Love Livin' in the City
2. Eyes, Don't Talk to Me
3. The Alley Cats, Nothing Means Nothing Anymore
4. Shock, We Were That Noise
5. The Controllers, Neutron Bomb
6. Skulls, Victims
7. The Plugz, Move It
8. The Deadbeats, Kill the Hippies
9. The Dickies, You Drive Me Ape (You Big Gorilla)
10. Vom, I'm in your Mom
11. The Flesh Eaters, Disintegration Nation
12. The Last, She Don't Know Why I'm Here
13. The Rotters, Sit On My Face Stevie Nicks
14. Hebe GeeBees, Night Fever
15. Accidents, Kill the Bee Gees
16. John Vomit & the Leatherscabs, Punk Rock Star
17. Negative Trend, Mercenaries
18. The Mutants, New Drug
19. Seizures, Cuties Wrong Now
20. Hitmakers, Lose
21. Psychotic Pineapple, I Want Her So Bad
22. Aurora Pushups, Victims of Terrorism
23. The Lewd, Kill Yourself
24. Wipers, Better Off Dead
25. Enemy, Want Me
26. The Cunts, Chemicals in the Mail
27. The Sillies, Heavy Breathing
28. Fingerprints, (Now i Want to Be a) Space Girl
29. Reruns, So So Alone
30. The Mutants, So American
31. Teacher's Pet, Hooked on You
32. The Chronics, Test Tube Baby
33. Dead Boys, 3rd Generation Nation
34. Suicide Commandos, I Need A Torch
35. The Silencers, Boyfriends Girlfriends
36. Page Croft, Naughty Bits
37. The Nervebreakers, My Girlfriend is a Rock
Email Post
Labels: 1978 live ledge punk realpunkradio scott hudson