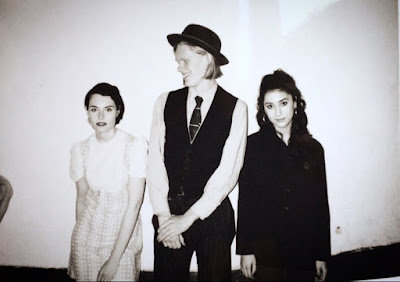 Although it's not intentional, every month's new release episode sees a record that is highlighted more than the rest. It's quite often a brand new band, although obviously that's not the case when one of my favorites of all time have a new release.

But discovering new bands is the ultimate goal of not only the new release show but Live Ledge in general. I'm constantly on the prowl for my next new favorite band. They may hold that title for only a few weeks, but it says a lot about today's music climate that there are so many great records put out every month.

This month's highlighted band is The Shadracks, who originate from Medway, Kent. According to the website of their label, Damaged Goods, it was a brief encounter in a deserted park land that led to Huddie Shadrack to form a group. Supposedly two rehearsals after finding Elle Meshack, the trio hit the studio to record their fabulous debut album!

The Shadracks are just one of quite a few new finds in this week's playlist, and I hope everybody discovers a band or two they've never heard before! You can find this show at almost any podcast site, including iTunes and Stitcher. Or...