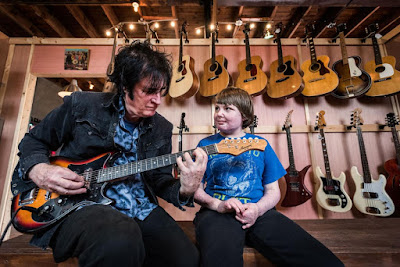 This month's new release episode was originally supposed to be a typical two hour broadcast of recently-released tracks. But it became clear as the tracks were being compiled that a regular Live Ledge wasn't going to be able to contain all of the great tracks. It was an easy decision to make this a two-part extravaganza.

This decision was definitely a good one to make, as the very next day I was sent an epic three disc set designed to help legendary rocker Sonny Vincent's medical bills. As he says in the liner notes to the 3 dics, 76 track "Tribute to Sonny Vincent", "on January 3, 2016, my son, daughter inlaw and grandson were in a tragic gas explosion/fire. I immediately flew to the hospital in North Carolina, (and) when I arrived they were all on life support. I have been taking care of them for over 3 years now. It's been a long, tough road to get them the best recovery possible. My touring, recording, and art exhibitions came to a full stop. My identity and how I connected to the world changed. I'm taking care of my twelve-year-old grandson Cayden 24/7. Keeping him caught up in school, taking him to all his surgeries, therapy appointments, Boy Scouts, sports, etc."

A number of Vincent's friends, including the late Mike Hudson from the Pagans, helped put the tribute together. The last 45 minutes of tonight's Live Ledge includes a few highlights from the set, and you can purchase your own copy (and help Vincent's family) by paypaling $25 to sonnyvincentpersonalmail@gmail.com. It's well worth the cash.