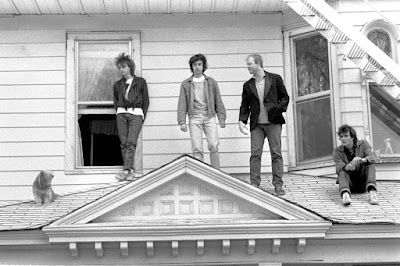 This was quite possibly the easiest show to put together as 1984 may be the most important year in my development into a complete music psycho nerd. Yes, the British Invasion of my early childhood and the introduction of punk in my teens are the foundations of almost everything I've listened to my entire life. But 1984 was the year I went from being a passive music fan to somebody completely obsessed with the discovery of new tunes.

This is partly because I was music director of my college radio station in 1984, which meant I got to open the mail every day. There's nothing better than to open box after box of promo records, especially during this era where college radio was considered a bit of a priority to record labels.

There's more to my increased mania than just my position at KAUR. It was a year that saw the release of some of my favorite records of all time. R.E.M.'s second album, Reckoning was one of them, along with Husker Du's Zen Arcade and, of course, Let It Be by The Replacements. My second favorite record of all time, Let It Be is perfect. Even a throwaway song like "Gary's Got a Boner" justified its place on the album.


1. The Fleshtones, American Beat 84
2. R.E.M., Harborcoat
3. R.E.M., (Don't Go Back To) Rockville
4. R.E.M., Little America
5. Jason & The Scorchers, Absolutely Sweet Marie
6. Jason & The Scorchers, Both Sides Of The Line
7. Guadalcanal Diary, Watusi Rodeo
8. Tommy Keene, Places That Are Gone
9. Tommy Keene, Back To Zero Now
10. Hüsker Dü, Never Talking To You Again
11. Hüsker Dü, Pink Turns To Blue
12. Hüsker Dü, Whatever
13. Hüsker Dü, Turn On The News
14. Minutemen, Political Song For Michael Jackson To Sing
15. Minutemen, Theatre Is The Life Of You
16. Meat Puppets, Lake Of Fire
17. Man Sized Action, On The Phone
18. Soul Asylum, Draggin Me Down
19. Soul Asylum, Money Talks
20. The Lyres, Don't Give It Up Now
21. The Lyres, Love Me Till The Sun Shines
22. Young Fresh Fellows, Rock 'n' Roll Pest Control
23. The Del-Lords, How Can A Poor Man Stand Such Times And Live
24. The Del Fuegos, Nervous and Shakey
25. The Replacements, I Will Dare
26. The Replacements, Unsatisfied
27. The Replacements, Gary's Got A Boner
28. The Replacements, Answering Machine
29. PHONES, Waiting On Patience
30. The Ramones, Howling At The Moon (Sha-La-La)
31. The Chesterfield Kings, She Told Me Lies
32. The Vipers, Nothing's From Today
33. Lou Reed, I Love You, Suzanne