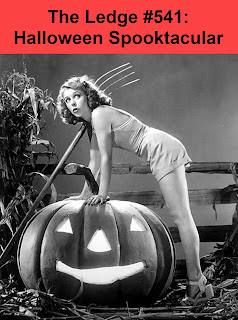 I may say this every year but it is worth repeating. Halloween is the ultimate rock and roll holiday. Like truly great rock and roll, Halloween is dangerous, controversial, and noisy. Religious idiots for decades have claimed both are associated with Satan.

For the most part, tonight's show is full of new or recently-released Halloween-themed tunes. Many tracks have been released within the last couple of weeks just for shows such as this one. The Damned, for example, just happened to put out a new live album TODAY!

8. Gentlemen Rogues, Empathy for the Devil

11. Roky Erickson & The Explosives, I Walked With a Zombie

16. Demisch, Making Monsters for My Friends

18. Jerry Only, Fear the Walking Dead

22. Bitter Branches, Monsters Among Us

23. Stormtroopers of Love, Making Love in the Crematory

24. The Mahones, Devil In Every Bottle

27. Billiam, Fell In Love With A Monster

28. The Dahmers, On Halloween

29. The Beatersband, NIGHTMARE ON ELM STREET