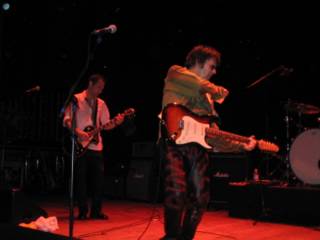 Finally, the day I've been waiting for since 1996 - a trip to see Paul Westerberg play with a band. I witnessed one of the solo Guthrie shows in 2002, and while it was great it certainly doesn't compare to seeing him with a band.

Disaster nearly struck right away as I screwed up my alarm clock. Luckily, I awakened at exactly the time I thought I had set. I quickly showered and packed, picked up Traci, loaded up on coffee, and hit the road.

The drive was by far the easiest road trip I've ever taken. Time just flew by as we chatted and listened to the 80's channel on my satellite radio.

We had to stop in Mankato to pick up "Faith", who had so generously purchased a front row ticket for tonight's show. Faith is a 20 year old little cutie who is stuck with a bunch of friends who don't understand her fascination for Westerberg. They'd rather listen to Good Charlotte. Poor girl.

Unfortunately, Faith doesn't drive and didn't really have a handle as to where her friend lives in St. Paul. After circling the city, we finally received better instructions.

Before heading to our hotel, we had one more errand to run. Violet's new album was pressed in Minneapolis, and since I was going to be in the area a couple of days after they were finished, I volunteered to pick them up. After circling the area for a few minutes, we finally found the studio and loaded the back of my Jeep with boxes of discs.

Finally, we hit the Marriot, located less than a block from the Pantages Theatre. We rested, showered, and had a quick room service drink before heading over to the famed Lee's Liquor Lounge for the Westerberg pre-show party.

Lee's is the quintessential salt of the earth bar, full of working class stiffs and smart-ass bartenders. We arrived a few minutes before the rest of the Wester-nerds. Message board owner Kathy was the first to arrive, along with her entourage.

And then came Zapp. A Sioux Falls legend, Zapp had entertained the 'mats with his dressing room renditions of Gap Band tunes when I co-promoted a show in 1987. Since then, he's moved up to Minneapolis and become a close friend of former Sly and the Family Stone bassist Larry Graham.

Finally, it was time to head to the show. Nervousness began to set in. What would he play? Could he still pull it off fronting a loud rock 'n' roll band? Or would this be a more low-key event?

I needn't have worried. Paul came out blistering in his spray-painted leather pants, racing through songs from his entire career. I was most surprised as to how well the new songs, especially "AAA", "As Far As I Know", "My Dad" and "Lookin' Up in Heaven", stand up with the old classics. Oh yeah, and Michael Bland is a demon on drums. I was near tears at many points of the show, particularly during "Sadly Beautiful", "Little Mascara", and "Left of the Dial". One great surprise was an irony-free cover of the Partridge Family's "I Think I Love You".

Afterwards, we headed out with Zapp to a couple of bars (and intense conversation) and finally staggered back to the hotel after a fruitless search for late night food.

Nice pictures and description of the show. I drove up from Ohio for the weekend also. I was at Lee's but we never met.

I'm doing a writeup on my blog also. Can I borrow an image or two if I link back to you?

Scott said…
Yeah...that's no problem. Tonight I'll finish up writing my weekend wrapup and probably post another couple of pictures (I took 272).