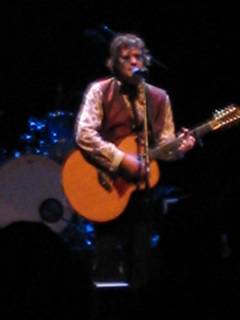 Saturday came way too early to us. Nobody on vacation should be up at 8:30! We laid around for awhile before getting ready to hang out in the big city. Our first task was a continuation of Friday night's fruitless search for food. We wandered for blocks and blocks looking for an open restaurant. The only one we found open had a half hour wait. I guess we should have just taken that.

Finally, Brit's opened at 11. Unfortunately, it happened to be the first time that I've ever experienced a bad meal in my favoritie Minneapolis restaurant. Traci's was even worse - her search for a cheeseburger ended with some obscure British cheese that she absolutely hated!

The afternoon was then spent in the Uptown area - disc shopping at Treehouse and Cheapo, along with stops at quite a few other shops. Our only 'mats-oriented tourist stop was the CC Club, one of the great blue-collar/punk rock bars. Sitting two booths over from where the "Achin' to Be" video was filmed, we downed a couple of drinks and chatted with the other sightseeing Westernerds. We had a long talk with London Paul, who had earlier met Tommy Stinson's mom at the Uptown. He was accompanied by Jason, the self-appointed local tour guide. Great people.

From there we headed back to the hotel for a quick shower, and then walked a block over to an Italian restaurant whose name I have forgotten. A nice place highlighted by some crazy old ladies at the next table celebrating their birthdays. Suddenly it was just a few minutes before showtime, and we had to meet my friend Pat and his two Irish friends outside of the Pantages.

Tonight we had fifth row seats (actually seventh row counting the two comp rows). Great seats for viewing, but a few feet too far back for great photos. We still shot quite a few, along with a couple of short videos.

I have to give the edge to this show. Paul seemed much more relaxed and confident, and the band once again smoked. After the Grandpaboy bluesman opening of "Dust My Broom", the setlist for the first few songs mirrored the first night. Luckily, this all changed with Stereo's "No Place For You". After this point, it was close to a completely different show. Unlike most people, I had pledged not to yell out any song titles. There's so many songs that I would have loved to here, but the reality is that I'm happy with almost any song. Lucky for me, he played almost every song I wanted to hear. "Born For Me", "Things", and "Crackle and Drag" are three of my favorite ballads, and he hit most of my favorite solo and 'mats rockers. Sure, I would have loved to hear "Unsatisfied", "Silent Film Star", and a few others, but who can complain about "Alex Chilton", "IOU", "Little Mascara" and his ramshackle cover of the Stones' "It's All Over Now"?

Traci made a great point when we hit the bar with Pat and the Irish contingent after the show. Paul is a true performer. As Johnny Rotten once sang, he "means it, man"! It sounds like a cliche, but he puts everything he has into his performance, even when he fucks up or gets pissed for some silly reason (like when his stool went missing). He is a Midwestern combination of Joe Strummer and Bruce Springsteen.

As I said earlier, after the show we headed out for a couple of drinks, and then crashed - extremely tired but also extremely satisfied.

Here's the setlist for the evening, along with a couple of MP3's: