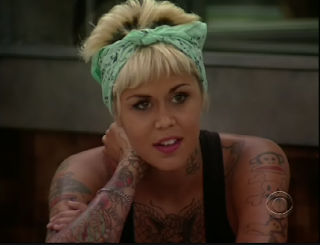 When you're a music snob such as myself, you're always looking for others that share your elitist views. Whenever there's a new talent in the movies or TV, I have high hopes that they are into some of the same bands as myself. For example, I was immediately smitten with Winona Ryder when I discovered she was obsessed with the Replacements.

Unfortunately, there aren't many like Ms. Ryder, especially when it comes to reality shows. Big Brother is the perfect example. Every year I single out a couple of contestants as potential music junkies...and almost every year I'm depressed by the second day of the live feeds when they start talking about their love of Britney Spears and movies featuring Julia Roberts.

One person in the 2010 cast (season 11) immediately stood out, though. Lydia Tavera had the look of somebody who has been to her fair share of club shows - tons of tats, constantly changing hair color and style, interesting wardrobe choices, etc. I never really figured out if she was indeed a music head, though, as the rest of the cast had typical middle-of-the-road tastes.

I still held out hope, however, and after great Ledge appearances by season 12's Ragan Fox and Matt Hoffman I threw out an invitation to Ms. Lydia. Not only did she accept, but she responded with a song list that perfectly fits the format of the show. Not only were her band choices top-notch, the individual songs weren't the obvious picks.

Besides the music, Lydia chatted about her life in the Big Brother house. You can hear this episode at theledge.mevio.com, or directly download it here.

Here's the tunes Lydia selected for the show:

2. Ramones, We Want the Airwaves

3. Clash, Lost in the Supermarket

4. Less Than Jake, The Science of Selling Yourself Short

9. Rancid, Fall Back Down

10. The Distillers, Drain the Blood

17. The Network, Teenagers From Mars

18. Death On Wednesday, No Regrets
Email Post
Labels: The Ledge

the goddess said…
you're a music snob, i'm a full on elitist snob and not much a fan of so many reality shows. i'm no troll, though, and i do love spinnerette (ghetto love a close second behind sex bomb).
6:37 PM

Scott said…
You're the farthest imaginable from a troll. :)
6:43 PM

KM said…
Loved this podcast! Lydia was awesome and she made some great song choices. I’ve been on a Social Distortion binge since listening to this episode this morning. It always bugs the shit outta me that the only song my local radio station ever plays is Ball and Chain. Sure, it’s a great song but dig deeper and find all the truly awesome gems in their music catalog! Green Day’s Ha Ha You’re Dead brought back some great memories of my kids. My oldest son, around 18 at the time had bought Shenanigans and was playing it over and over and over again trying to learn all the lyrics. My youngest son, around 7 yo, was immediately obsessed with this song. He ran around the house jumping up and down, headbanging and singing at the top of his lungs. This song started him on the path of music obsession that he continues to this day. Unfortunately, my oldest went in a different music direction ( i.e. he has crappy taste in music now... Insane Clown Posse...need I say more?) lol. Thx for sharing this episode!
10:48 AM