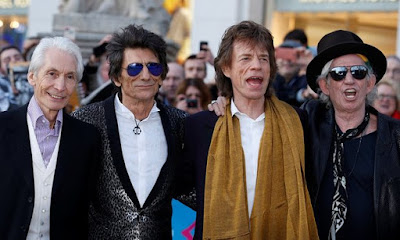 This episode was supposed to air last week, but the finale of "Big Brother Over the Top" meant that we did our final Big Brother Gossip Show last Friday night.

To make up for it, though, I went overtime tonight. Well, I had no choice as I had so much new music to sample. And what a variety of treats. Besides new power pop bands such as Public Access T.V. and covers projects by The Connection and Yo La Tengo, some legends surprised everybody with their best albums in quite some time.

Of course, I'm mainly talking about the Rolling Stones, whose new blues album, "Blue and Lonesome", is their best record since either "Tattoo You" or "Some Girls". Recorded in three days, this is the live-sounding studio record we've always hoped to hear.

Neil Young's brand new album, "Peace Trail", is also his best record in quite some time. Inspired by the protests at Standing Rock, the songs are not explicitly about what was going on up there but the cause truly aided in the songwriting.

There's also some reissue material from the likes of Big Star, Bob Dylan, Otis Redding, and The Who. There's something here for everybody, so grab this on iTunes or Stitcher, or...