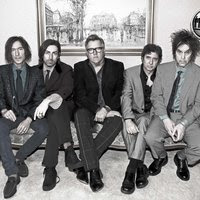 New release shows are always the most enjoyable to put together. The day starts by going through that always-growing stack of new music acquired over the last few weeks. That alone will always lead to enough tunes for a show.

As the day goes on, however, it's almost inevitable that other tracks come to my attention. Websites obtain premieres. Artists sneak out surprise releases. There's also discoveries of albums that I may have previously missed.

This week was no exception. I was all set by noon today for this month's new release show, and then came the deluge of new finds. Superchunk put out a single. The Coathangers rushed out an EP. Ray Wylie Hubbard released a new single that features not only Lucinda Williams on vocals but name-dropped The Kinks and Replacements in the lyrics. Of course these had to be added!

This episode should really work as your guide to new music, and there's so many ways to listen to it. There's now a player in the sidebar of this site. It's also in iTunes and Stitcher. Or you can...