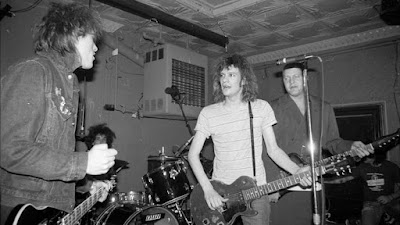 It's a day I never thought I'd see - a new release Live Ledge featuring new music by the Replacements! Yes, today is quite the day for me and my fellow Westernerds, as Rhino Records has put out a live album featuring their February, 1986 perfromance at Maxwell's in Hoboken, NJ.

And it's everything I wanted this album to be. Yes, I've had a bootleg soundboard of this show for years and years, but this professionally recorded and mixed performance brilliantly showcases everything that's great about the band. The lead guitar work of soon to be axed guitarist Bob Stinson. The on the edge balance between ferocious and train wreck. Great songs. Surprising covers. It's fabulous.

Tonight's show featured four tracks from this release, and due to the amount of great new releases in general next week will see a part two of this month's installment of new tunes. More tracks from this record will be aired, along with further material from the Husker Du archive release that was also featured tonight. But there's a ton of other records that I just didn't find time to play tonight.

As always, grab this from the usual sources, including iTunes and Stitcher, or...