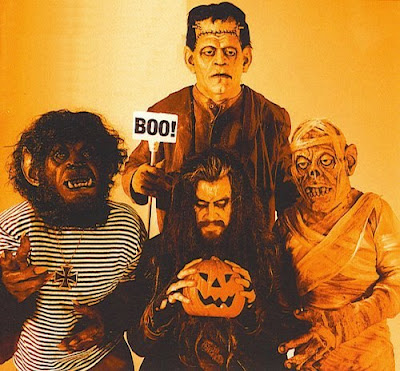 As long as I've been doing podcasts I've had a Halloween episode. Punk rock and Halloween go together so well that there's a never-ending catalog of potential songs. Sure, there may be a track or two that was played in previous Halloween editions, but for the most part I try to make each show as unique as possible.

This year's edition is tremondously helped by a new compilation called "Punk Rock Halloween", which features two dozen old school punk bands with new and old tracks. Tonight's show features a handful of songs from this disc, including the UK Subs, The Members, and The Adolescents.

There's also quite a few songs from the great garage days of the 60's, and some new favorites by The Buttertones, Chain and the Gang, and Slushy.

I also announced a giveaway to the November 29 Minneapolis appearance of Guttermouth, The Koffin Katc, Gallows Band, and The Atom Age. If you're interested in going, please leave a comment here or send an email to paulisded @ gmail dot com.

I expect all of you to blast this show at full volume as you hand out your goodies. If you have an Alexa, just tell her to play "The Ledge at Tune-In". Or you can grab it via iTunes or Stitcher, or...