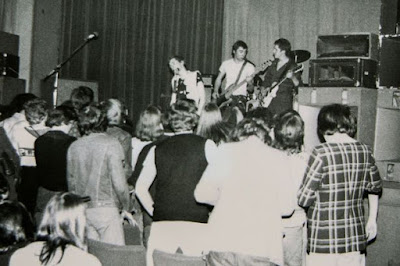 One of music history's biggest lies come from those who claim to have attended Woodstock. If everybody who says they were there actually attended, Max Yasgur's farm would have seen ten million hippies instead of the 500,000 or so who actually did partake in everything that happened that August weekend.

A similar situation happened a few years later in Manchester, England. Two future members of the Buzzcocks invited the Sex Pistols to perform in their lovely city, and the few dozen wtinesses now numbers thousands! However, it's who was actually documented as being there that matters. Besides those Buzzcocks members, most of Joy Division was present. Mark E. Smith of the Fall was in the crowd, as was producer Martin Hannett, future Factory Records head honcho Tony Wilson, and 80's hit vocalist Mick Hucknall of Simply Red. Yes, this show completely jump-started a music scene that is now looked as one of the most influential for fans of punk, post-punk, and the dance-rock "rave" scene of the late 80's.

It's a fun, fun show, with some of the highlights being relatively obscure tracks discovered in a new Cherry Red box set called Manchester Nort of England. This is a huge box consisting of seven CD's and 146 tracks.

As always, grab this from the usual spots where you enjoy all of your favorite podcasts, including Stitcher and iTunes, or...